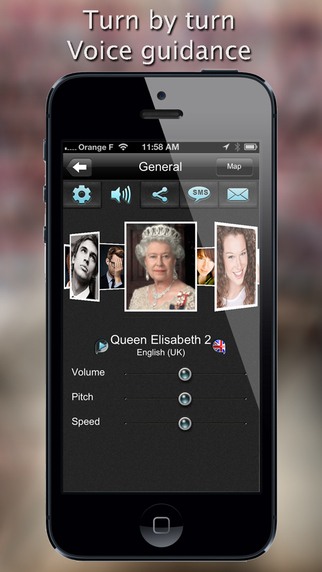 I love voice guidance and always have it switched on. If I'm heading for an unfamiliar destination, it means I'm not continually flicking my eyes between the road and my phone and that's a big plus.

I don't pipe the voice guidance through the car's stereo. I have a playlist from my iPod playing through the stereo and my iPhone using its own speaker for voice navigation.

This means I can control the volumes independently.

I set the playlist volume for the whole car and the voice navigation for my ears only.

Now, with reference to the image at the left, wouldn't it be nice to be able to select the voice to be used for Uber navigation? Even if they can't spell Queen Elizabeth correctly?

Unfortunately, that's not the case.

We are stuck with the Aussie female voice that Uber has selected for its navigation app.

BUT... why are there two versions of the voice? And why does every update of the app seem to switch from one version to the other?

Has anyone else noted this?

It drives me mad.

In one version of the voice, she speaks in a crisp, incisive manner. Even with a long description, it's stated quickly and succinctly. I like it. It takes advantage of the fact that we can hear more quickly than we can speak.

But with the other version, everything is s-l-o-w-e-d d-o-w-n. It sounds like she's falling asleep. It takes forever to say "Using the upcoming right lane, make a right turn towards Eumundi-Noosa Road toward Tewantin". I'm ready to drop off by the time she's finished.

And it's not a digitally slowed down version of the voice. If it were, the pitch would change. So whoever decided this was a good idea, actually recorded two versions of every direction! Hmm... I could think of approximately one million things I'd give a higher priority to lol.

So I've got 2 questions I'd love to see answers to in the Comments section below:

1. Have you noticed this?