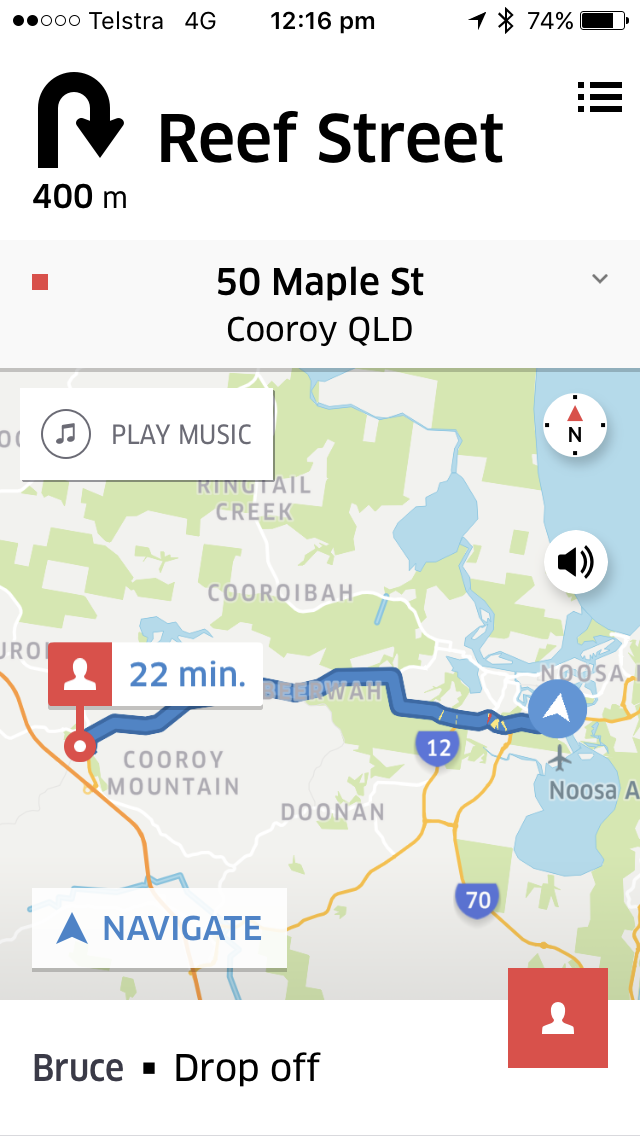 There are many things to like about Uber's navigation app.

I'll have a separate post on what I consider to be the ideal setup for music and navigation.

If only the actual GPS navigation worked as well as the rest of it.

Now don't get me wrong. Most of the time it does and I prefer using it to the other alternatives simply because it works seamlessly with the partner app itself.

This has been happening on and off to me over several updates, so it appears to be endemic.

It has to be an issue with the software itself, and I don't understand why they can't fix it.

Surely I'm not the only one it happens to. Please let me know your experience in the Comments section below.

The issue is this:

I'll be in the middle of a trip, everything going fine, when the Uber navigation suddenly issues a directive that makes no sense at all. It will indicate that I'm in a different street and tell me to turn into a street that's nowhere near me!

I then realise that it's reverted to a previous trip.

And it's issuing turn by turn directions as if I'm doing that trip again.

As you can imagine, it can be quite disconcerting. I've learned to ignore it, and continue the current trip using my local knowledge. Fortunately, I drive in a relatively small area and know my way around. Usually after a minute or two, the navigation comes good and picks up the correct details again.

If you've experienced anything similar, please let me know and I'll report the issue to Uber.

This one is really bizarre.

I picked up a ride from Noosa to the Sunshine Coast airport. This is one I like to get. It returns around $35 (more if surged or an Uber Select) for a nice half hour trip on excellent roads.

And, depending of flight arrivals, I can pick up a return from the airport for a total of $70 for an hour's driving, plus some wait time.

But this time, I got a call from 8 minutes away. So not an airport pickup, but I decided to accept it anyway.

The Uber navigation GPS directed me perfectly, street by street, until I was parked outside the destination.

No sign of the passenger. Just two older guys doing the gardening and obviously wondering what I was doing parked outside their property.

So I telephoned the rider, but got voice mail. I left a message, and he rang back almost immediately. I told him where I was and asked if it was the correct address.

He was totally confused. Why?

Because he was at the airport! Standing outside Arrivals, in fact.

He hadn't entered any address, simply dropped the pin.

Dropped the pin about 500 metres from where I already was, at the airport! Yet the Uber GPS directed me to a specific, unrelated address 10 km away. Why?

I'll be asking Uber to explain this and will let you know what they come back with. Has anyone else had a similar experience?

Just thought I'd mention that he waited at the airport while I returned to pick him up and take him back to Noosa. (We all like a happy ending.)