Is Uber Surge Gone for Good? 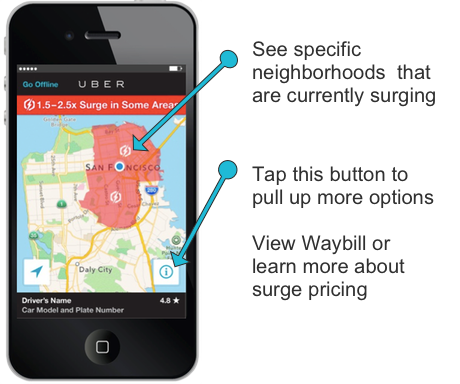 Have you noticed you’re not getting as many Surge requests as you did in the past? There could be a reason for that. Today, we analyze what’s happening with Surge (and also with Lyft's Prime Time in the U.S.) why it’s happening and what drivers can do about it.

I think most drivers have noticed that there’s a lot less Surge on the road nowadays.

If you rely on big Surge rides to make ends meet, the future probably isn’t bright for you. The days of sniping multiple $70+ surge rides from big events, traffic bottlenecks, and clever positioning are mostly over. There are still some chances out there but they are very rare. Of course I’ll still take them if I see an opportunity.

Related: What are the best times to drive for Uber?

IIn the past, once a driver got a ride they were “locked in” to that specific rider until the ride was completed. The dispatch system for Uber more or less sent the closest car that was “available” without a present ride. This was rather inflexible and the result was fairly predictable Surge. It made me lots of money. Things have since changed though because…

The App Can Handle More Rides With Fewer Drivers

Uber (and Lyft in the U.S.) have devoted some of their best engineers to figuring out how they can rearrange and advance their dispatch systems to make dynamic pricing a rarity.

Uber and Lyft want very little dynamic pricing because they firmly want their app to offer the most reliable platform with the cheapest rides and lowest wait times.

Here are some features that have helped them get rid of dynamic pricing in the last year:

A big factor in reducing Surge involves back-to-back rides. It allows for drivers to “stack” a 2nd ride when they are in the last few minutes of their current ride. This means that 2 passengers are effectively assigned to the same driver for a few overlapping minutes.

This plays a big part in reducing Surge because the system can now “balance” the number of incoming requests with available drivers more effectively. If there are 100 drivers in an area and each of them have a rider in their car, we can suppose that 25% of them are in the last leg of their current ride. So adding new requests at the end of the rides that are ending is like instantly adding an extra 25 drivers!

This feature is mostly still in testing, but it basically works by providing drivers with information on where to go for a ride based on historical data, time of day, and other factors. Each suggestion is different for each driver.

These maps help Uber “spread” drivers around a city in real-time by nudging them on where to go for their next ride. If they can put a driver closer to where requests will originate using historical data, then it drastically reduces the time it takes to pickup a passenger. If this saves an average of 3-5 minutes per ride, than it quickly adds up to make the entire app more efficient and reduces the likelihood of surge.

So in the near future drivers might end up chasing heat maps for rides that don’t even have surge!

Still being trialled in the U.S., the app will now assign a new ride to you if a newer, closer request occurs while you are driving to your original passenger. For example, if you are already driving to a passenger who is 5 minutes away and a new passenger starts a request that is only 1 minute away, it switches the ride. Presumably, this only occurs if your original passenger can also be switched to a closer driver.

The “switch” means that pickup times for passengers are reduced and they provide some leeway for Uber to “reorganize” the ride requests that are coming in during a busy period.

These changes should result in a lot less downtime and dead kilometres for drivers. They are much more efficient than the previous system and in many ways they are smoother too. It seems like Travis Kalanick's vision of the “never ending ride” is coming together quite nicely. Most drivers are definitely giving more rides than ever before!

That’s all fine and dandy, but at the end of the day it just seems like drivers might be doing a lot more driving for slightly less money.

As Uber matures, they are going to continue to push drivers away from dynamic pricing because they have relatively little to gain from it. It looks bad to the press and the passengers, and they simply want to provide the cheapest rides with the shortest ETAs. It doesn’t matter if it means we have to give more rides to make the same amount as before.

After all, the less we make per ride, the more we have to drive right? Sounds like a good deal for them…

Readers, have you noticed a decline of Surge rides in your city? Let us know in the comments!