Uber has announced that it will be releasing a new driver/partner app in the U.S. this year. It will take a few months to be rolled out to all Uber drivers in the U.S. with Android users in Los Angeles and Atlanta getting it first.

Partly, it will depend on feedback from the U.S. rollout, how many and what kind of problems are discovered and how much work is required to fix them.

But it's further complicated by the many differences that there are between versions, not only in different countries, but in different states or regions within the same country.

For instance, the tipping facility was rolled out across the U.S. in September 2017 and we were led to believe that it would be added to the Australian app by the end of that year. See our article Uber Australia: What's Next? published on 13/09/2017. Now it's April 2018 and there's never been another word about it.

So what does that mean when a version of the new app comes to Australia. Do they leave the tipping facility in or do they remove it? If they leave it in, do they need to modify it for Australia? And that's just one example of a difference. There are many others.

The New Uber App: Here's What We Know 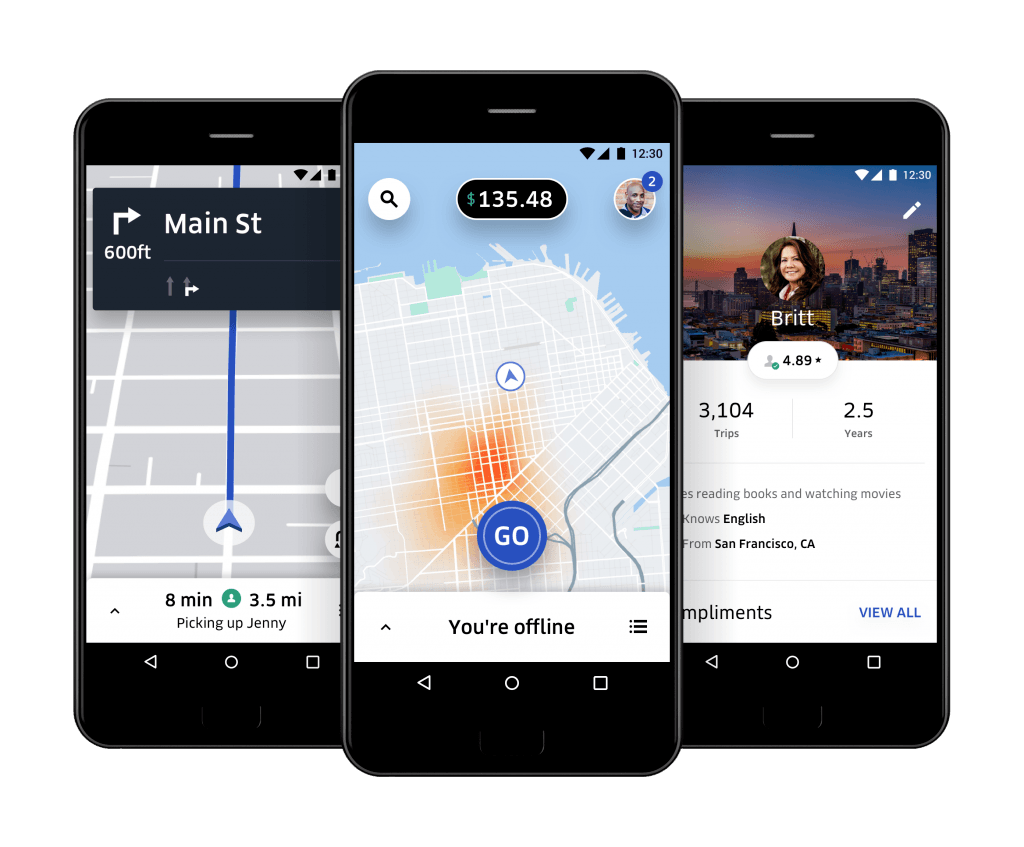 At the top of the screen sits a new real-time Earnings Tracker. It lets drivers know at a glance how much they earned on their last trip, and makes it easy to track progress toward their goals.
The new Status Bar provides real-time updates on market conditions around them and opportunities for more trips nearby. When a driver taps an opportunity, the app will provide optional navigation to the recommended area.
The Notifications feature lets drivers see messages about upcoming earning opportunities, feedback from their riders, and information about their account.
The Driver Profile gives drivers the opportunity to showcase themselves, and allows riders to learn more about their driver and find new ways to connect.
Feedback indicates that the new experience can be a bit intimidating, whether it’s your first trip or your 100th. Uber intends to make things a little smoother with Driver App Basics, a comprehensive guide to getting started with Uber that will be available to drivers in the coming months.

The Carousel allows you to move between three different versions of your Uber earnings.

But one of them is an incentive scheme that we don't have here in Australia at all.

In fact, compared to the U.S., we have virtually no incentives at all. Hmm... don't suppose that could have anything to do with Uber having Lyft as a major competitor in the U.S. whereas they are a virtual monopoly here.

For example, if you were a driver in Los Angeles in March 2016, you could pick up an extra $500 just for completing 75 trips in a week!

Uber Quest is an incentive scheme which varies from time to time, but essentially offers cash incentives for completing a certain number of trips in a certain time. It may also include other conditions, such as maintaining a minimum acceptance rate.

I like the idea of getting real-time information from Uber on when/where to drive, but I’m not sure yet what type of information Uber can give drivers that will be super valuable. Drivers want to work as little as possible and make as much money as possible, whereas Uber is usually trying to maximize a driver’s efficiency. There's an app called FarePilot (only available on iPhone and I haven't yet checked whether or not it works in Australia, but if it does I'll do a separate post about it) which provides additional information to drivers. And its incentives are perfectly aligned with a driver’s incentives to make more money!

The Uber App Status Bar notifies a driver that they should go to a boost zone to get more rides/make more money, duh! But the problem with directing drivers to areas of higher demand in general is that we’re not sure who gets these notifications. I’d love to see veteran or more valued drivers get rewarded, but this isn’t something that Uber tends to do.

Uber’s surge maps already have this effect with lots of new drivers immediately gravitating towards surge zones, but as more and more show-up, surge and demand disappears. That’s why we tell new drivers not to chase the surge! The quality of information matters and knowing who gets it could make a big difference in earnings. 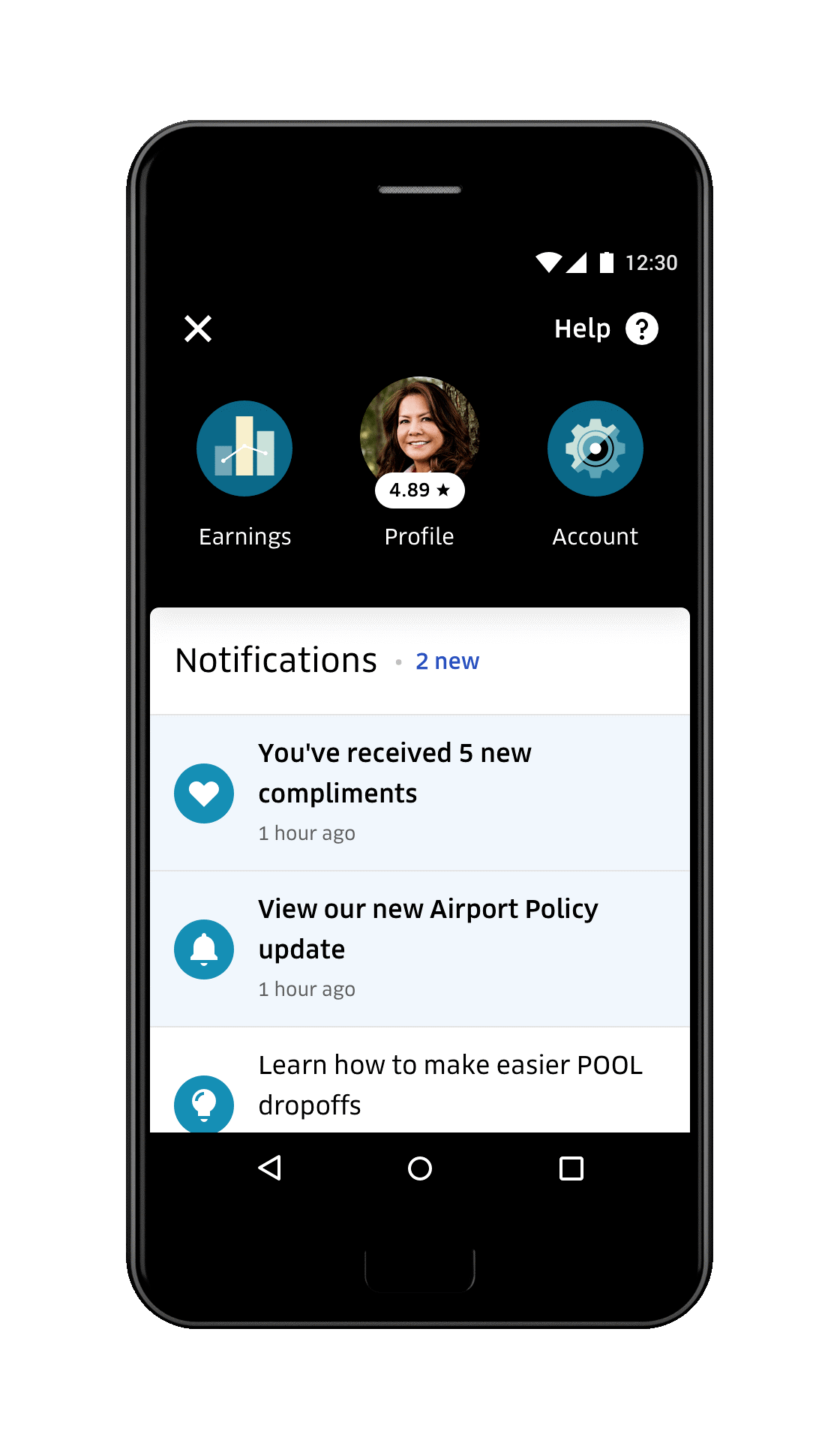 The feed on the Uber driver app contains a lot of helpful information, but there was never a way to access old messages or control what showed up at the top. Notifications operates a lot more like an inbox, so you should have a record of every notification and once you read them, they’ll get marked as read. This is a simple design that makes sense for drivers.

This was available in the prior version of the app and while it’s a cool feature, it’s not something that many passengers ever bring up – but they do look at it.

Pro-Tip: Ask your passenger an open ended question in your profile. This will encourage unique conversation AND ensure they do most of the talking during the ride (while you focus on driving). Also, these people might just be more likely to tip. Oh that's right, we don't have the tipping feature.

We don’t have a ton of information about this part of the app yet but  it looks helpful. Uber’s training and education in general has been lacking over the years, and it’s part of the reason why so many people have taken a liking to our content.

So even though this library may cut into some of our business, we are glad that Uber is taking their training and resources for drivers more seriously with simple to read walk throughs, explanations and short videos that cover topics like ‘how driver destinations work’. Maybe they should ask us for some tips?