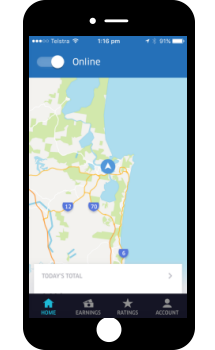 Going Online with the Uber ﻿﻿Driver App﻿﻿. I was nervous the first time I selected the Uber Driver App on my iPhone and swiped it from Offline to Online.

I’m the sort of person who’s not comfortable going into the unknown. Especially when there’s other people involved. Especially if they are strangers. I like to be thoroughly familiar with what’s going to happen next and to have planned for contingencies in advance.

Unfortunately, none of this was possible with Uber. I’d watched the instructional video for Uber drivers on the Uber website, but it was almost totally devoted to the back end. How to find out what your earnings were, how to check your ratings and so on.

This wasn’t what I needed. I could explore the back end at my leisure, when I wasn’t experiencing the stress of picking up my first rider.

But I had to admit that the few seconds the video devoted to the Uber Driver App’s front end made it look pretty straight forward. The navigation would guide you to the pickup point, you’d see a button to Start Ride and at the end of the trip, another button to Complete Trip.

As different versions of the Uber Driver App apply to different locations, you may need to ask Uber where to find your instructional video. Mine was at https://sunshinecoast.ubermovement.com/anz-using-the-app/.

Well, I got my first Uber rider within a couple of minutes of turning the app on. It was pretty exciting, except that there was no voice guidance coming from Uber’s navigation and, as I hadn’t been able to mount the phone on my dashboard, it meant I would’ve had to hold it in my hand and drive one-handed as I glanced at it for directions.

As this is certainly dangerous and probably illegal, I stopped and entered the destination into the car’s GPS, not knowing if that would be a problem for the Uber app (it’s not).

Note: Since then, I’ve figured out how to play the Uber navigation’s voice guidance through the car’s stereo system, automatically quietening the music coming from the phone’s playlist when the navigation is speaking and I’ve experimented with different phone mount solutions. I’ll cover all this in a subsequent post.

With nervous anticipation, I approached my rider’s pickup point. But he wasn’t there!

I didn’t have a protocol for handling this situation. What do I do now?

Note: Since then, I’ve developed protocols to handle a wide variety of situations, including rider no-shows. I’ll also cover these in a subsequent post.

So I drove up and down the road a bit, and eventually saw a guy waving at me. Turned out he’d moved from the original spot where he had entered the rider app. So no big deal. All’s well that ends well, right?

Well, not in this case. I looked at the app on my phone, expecting to see, as the instructional video had led me to believe, a button to Start Ride.

It simply wasn’t there. What had gone wrong? Was it because I’d used the car’s GPS? Was it because the rider had moved from the pickup point? I had no idea, and felt like a fool fumbling with the app to get started.

In the end, I cut my losses. Admitted to the rider that it was my first time and I couldn’t make the Uber Driver app work properly. I asked him where he wanted to go (it wasn’t far) and drove him there for free.

Takeaways from My First Uber Drive

1. I needed more information on how to use the driver app than was available from Uber. Who better to ask than other Uber drivers? (In fact, that’s why Sam and I started this website – to make all of the best resources available to Uber drivers, including practical field experience, in the one place).

3. You activate buttons by swiping them, not tapping them.

5. It doesn’t matter what navigation you use. It can be the built-in Uber navigation, a third party one such as Google Maps, your car’s GPS (though you may annoy your rider by taking the time to input the destination) or none at all because you know where you are going. When you get there and swipe Complete Trip, the Uber Driver App will calculate the fare according to the distance travelled and the time taken.

6. If you are not at the exact drop-off point (and this happens often) you won’t see the Complete Trip button. Just as for pickup, tap the rider’s name, and then swipe Complete Trip.

I hope that these tips will help to make your first experience as an Uber driver less traumatic than mine.

How to Deal with an Angry Passenger

I’m an Uber Driver: Who Dinged Me?

My First Day Driving for Uber