When a reader posts a question or a comment on the site, everyone has the chance to read it and hopefully benefit from it.

Some of our subscribers prefer to email us direct.

Which is fine of course and we always reply but it does mean that no one else gets the benefit.

So this article is a collection of questions and answers from some of those emails, but without the individual subscribers being identified.

Who knows, maybe a question you've been wondering about is answered here!

Q1: Hi Guys,
I was pondering exactly this when I was looking for a new car recently. I spoke to 2 Uber drivers that picked me up and they said Uber Select rides were pretty few and far between here on the GC.
But then when we last selected one to take us out on Melbourne Cup day last year the driver was surprised as we were his third Select ride in a row.
I ended up not getting a car that qualifies for Select to keep the budget down.
But,
on my Android phone we have always see how much a UberX, and Uber Select and XL would cost before we Confirm.
Maybe its just the Iphone app that doesn't ? 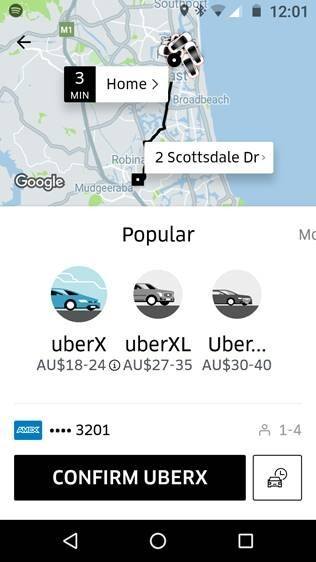 A1: I was unaware of that difference between Android and iOS.

That sort of thing just shouldn’t occur and is a sign of software development out of control. There should be consistent core app modules that interface with different code to port onto different platforms.

And yes, more likely to get UberSelect for special occasions like Cup Day.

Also, it would be brilliant if you could post your email as a comment on the article:

including the phone image.

Q2: Hi.
I am trying to find info on Uber Select, preferably in QLD (I am on the Gold Coast). I would really like to know the percentage of rides I could expect for Select. I have rung Uber but they don't know so it is difficult making a decision whether to buy a more expensive car.
Thanks.

I’m on UberSelect (on the Sunshine Coast) and the number of UberSelect rides I get is minimal (less than 1 a day) so I would say that it’s not a good idea to get a more expensive car just for that.

The fault lies with the app. I’ve had conversations with passengers who had no idea you could request anything other than UberX. 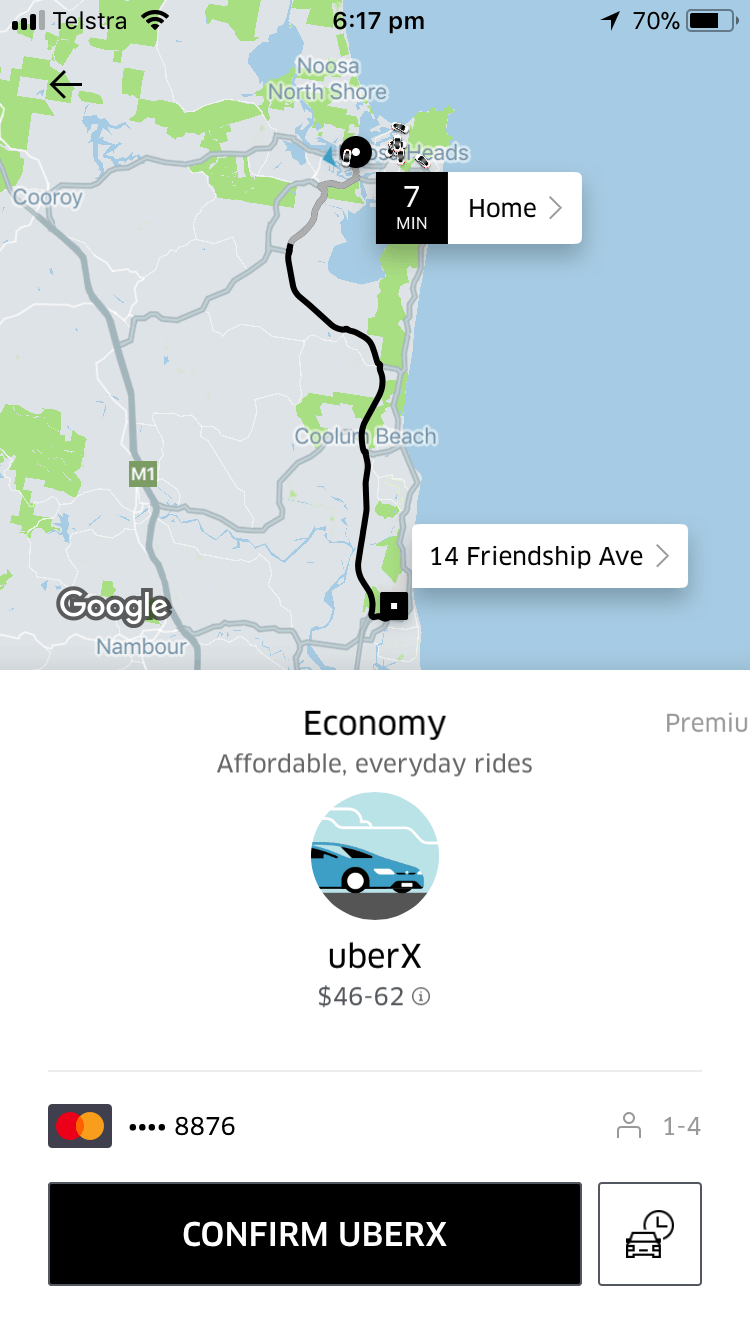 At this point, all their attention is focused on the big CONFIRM UBERX button.

They don’t even notice the option to click on Premium.

It would be far better if the app showed all the options equally across the screen, each with its own button. For example CONFIRM UBERX, CONFIRM UBERSELECT, CONFIRM UBERASSIST.

Creating a Useful App
One of the main tools used by software developers when designing an app is User Stories.
A User Story takes the form "As a (stakeholder) I need to (do something with the app) so that I can (achieve some goal)".
The idea is that if User Stories are well written and cover all of the user requirements, and the app is then developed to satisfy all the User Stories, the result will be a high quality, useful app.
The User Stories that would have avoided this problem are:
"As a rider, I need to see clearly the vehicle options available to me so that I can make an informed decision about what I choose for this particular ride."
"As an Uber driver with an up market vehicle, I want riders to be able to easily select my type of vehicle so that I maximise my income."

Flexibility Is the Key
Note that to satisfy the first User Story, all options have to be presented every time. This recognises the fact that there may be different vehicle requirements for different rides.
For example, UberX to go to the supermarket, UberSelect or UberBlack to arrive at a wedding, UberXL for an airport run with a lot of luggage and a set of golf clubs.

Q3: Thanks for the info, so how do we get Uber to change the app?

A3: Sorry, but there is zero chance we can get Uber to change the app.

I speak as a former software development team leader. I know how these things work.

There will be a software development team buried somewhere in the U.S., with about 50 levels of separation from not just us users, but also the support team here in Australia, who wouldn’t understand the issue anyway.

The software team will have enough feature development and defect fixes on their plate to last the next year and a half. They won’t be looking for any more.

In fact, they’ve had so many that they are no longer repairing the existing app, but are about to release a new one.

I’ll try to keep everyone posted on the new version.

But like all new software, the initial release will have defects.

More than anything else, I’d like a navigation app that worked properly all the time.

Subject: For Uber Drivers, Long Trips Have a Dark Side

Q4: I’d be interested to know the outcome of this particular case.

I think if I receive a fare that is long I will have to call the Uber hotline to seek prior approval before I drive my LandRover over 100 klm for any fare similar...

You may be interested to know I did Uber Eats for 2 months and worked 6 days for roughly 10 hours each day to receive a very meagre pay of just over 700 bucks per week on average. Wasn’t worth it. I was very despondent and polarized about whether to do the GST Registration with the ABN and BAS every quarter. Eventually I made the decision and paid for my COI and the defect repairs. I switched to X ridesharing and parted with over 1200 bucks (half of which was getting started, the other half in defect repairs.) I am happier with ridesharing and believe it is viable, doable and perhaps worthwhile despite the GST/BAS 10% additional tax (bit the bullet.) . I will never ever do Eats again. Dominoes delivery guys make more than Eats Drivers...

Great work you do. I’m new and working on your income vs expenses spreadsheet...

I haven’t had the situation arise since.

Uber text support is the pits but telephone support is reasonable. Not really good, but they do at least address the question you’re asking.

I suspect most text support is 100% automated. So you get useless, boilerplate responses.

Subject: How Do Taxes Work for Rideshare Drivers?

Q5: Just a query regarding the P&L section of the Income and Expenses spreadsheet.

As you point out the total GST payable is on the amount the customer pays, not the amount received by the driver (which is less 25%).

Can you please advise.

A5: You’ve raised some interesting questions.

As well as entering the total amount your customer pays in the Income:Uber column, you must enter the amount from Uber’s invoice to you in the Uber Expense:Ex GST:Amount column. This will ensure that GST is calculated correctly and that Profit or Loss is based on the amount received by the driver.

I have realised, though, that the spreadsheet is calculating profit or loss on the GST inclusive amounts for both income and expenses, whereas it should be on the ex-GST amounts. I will fix this. This will have the effect of reducing profit by the difference between GST received and GST paid. It will have no effect on the BAS itself.

Note, however, that from the Uber invoice dated 5/12/17, Uber started paying GST in Australia. My interpretation of this is that from that invoice onwards, you only need to pay GST on the net amount received from Uber. So just enter that amount in the Income:Uber column and nothing else.

Would you mind posting your email as a comment on the website so that others can see it and the reply.

Q5 continued: Can you clear up my confusion regarding Uber not having to pay GST to the ATO.

I believe that Uber is double dipping here. They should be paying the driver $494.54, as their 25% commission should be on the ex GST amount of $581.82. The net to the driver would then be $436.36. Uber should not benefit from the GST component.

A5 continued: This all changed from the 5th of December, when Uber registered as an Australian company and started paying GST.

I’ll put up a post when I’m around all the ramifications, but my take on this is from that point onwards, we only pay GST on the amount we receive from Uber, both simplifying the accounting and slightly increasing our take.

I also intend to seek a full explanation of the commission structure from Uber and other rideshare companies operating in Australia and publish them in a side by side comparison.

It’ll have to wait until I get back from holidays though.

We’re In It Together: Providing An Excellent Driving Experience