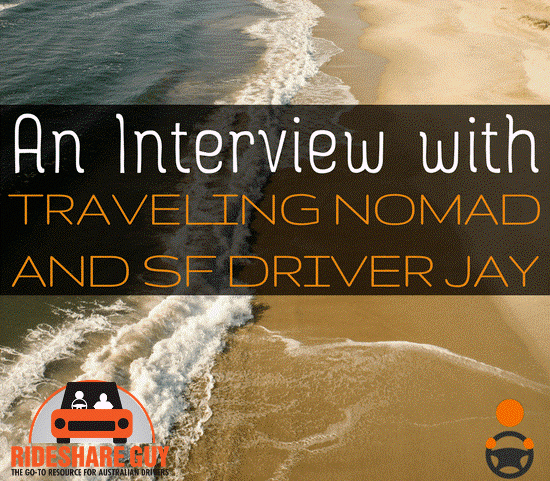 Have you ever wondered what it’s like to be a full-time driver and entrepreneur? In this interview, RSG contributor Jay Cradeur talks about what it’s like full-time driving, the strategies he uses to not burn out (he’s given over 15,000 rides!), and how he’s transitioning from rideshare driving into his own business.

Roughly half of all new Uber drivers end up quitting after one year, so what makes some drivers stick it out and go for the long haul?
In this article, RSG contributors Jay Cradeur talks about how he’s given over 15,000 rides – his tips, strategies, and how he’s able to take amazing vacations all because of his rideshare work.
At the same time, Jay knows rideshare driving isn’t forever and he’s come up with a strict schedule that gets him into a whole other path of entrepreneurship, so stick around for how Jay plans to accomplish his goals while rideshare driving – it’s inspiration for those of you who want to transition from rideshare driving to full-time entrepreneurship or another hustle.

Jay Cradeur is a full-time driver in San Francisco and a regular contributor to our RSG sister site in the U.S.
Jay’s worked as a coach in internet marketing, is a world traveler, and author of the book “Radical Freedom”. Prior to becoming a rideshare driver, he lived in Chiang Mai, Thailand, for a year.
He returned to the US, signed up to start driving and found it a lot of fun. His insights apply equally well to Australia.

Initially started driving in Sacramento but found San Francisco would be more lucrative, decided to move up to SF and drive full-time.
Wanted to travel and earn money and found ridesharing to be a good opportunity to earn money while driving around in a new part of the state.
Typical day: Monday through Fridays starts early, around 5-6 a.m. and drives for 4 hours to catch morning surge. Takes a break for lunch around 10 a.m. then continues until 7 or 8 p.m. to capture the evening surge.
Does get ruthless about choosing which rides to take: with Lyft, you can see the passenger destination before the passenger gets in the car, and Jay won’t take anyone who will take him outside of the city during surge times.
At first, Jay took everyone, but that wasn’t profitable given the surges happening in the city – made the business decision to only accept rides that would be quick, put him on track to earning a bonus, made business-sense.

Earning More as a Driver

Enjoys weekend driving because that’s an opportunity to make more: longer trips, airport rides, etc.
Saturdays could drive from 5 a.m. to 8 p.m. and be booked solid – but Jay doesn’t drive that much!
Avoids nights and still makes a solid income by ensuring he’s up and ready for early morning rush hour, surge, and airport rides on the weekends
Driving is all about freedom and flexibility, but it also takes a certain amount of discipline to get up, shower, put gas in your car and go. Just doing it everyday is the first step and from there you can profit

What’s Next for Jay?

Travelling is a passion: Jay has taken 10 vacations since starting rideshare driving.
Rideshare driving can take its toll on your body, so Jay doesn’t plan on this being his full-time job forever – plans on coaching full-time in June and continue with travelling.
Driving is a great opportunity to meet interesting people and just learn about them – be inquisitive.