I used the new Uber Driver App for the first time this morning for 5 trips spread over 4 hours, for a total of $112.28.

Overall, I liked it, although as I indicated in the previous post, the differences are more superficial than substantial.

However, I believe that there has been a substantial rewrite of the underlying code.

That should make rolling out new features in the future easier, quicker and more reliable.

Two features that have been in overseas versions of the Uber Driver App for a long time, for example, are provision for tipping (which also requires an update to the Uber Rider App) and showing what your position is in an airport queue. Love to see both of those here soon!

Here are some screenshots of various aspects of the new Uber app, with my brief take on each one. 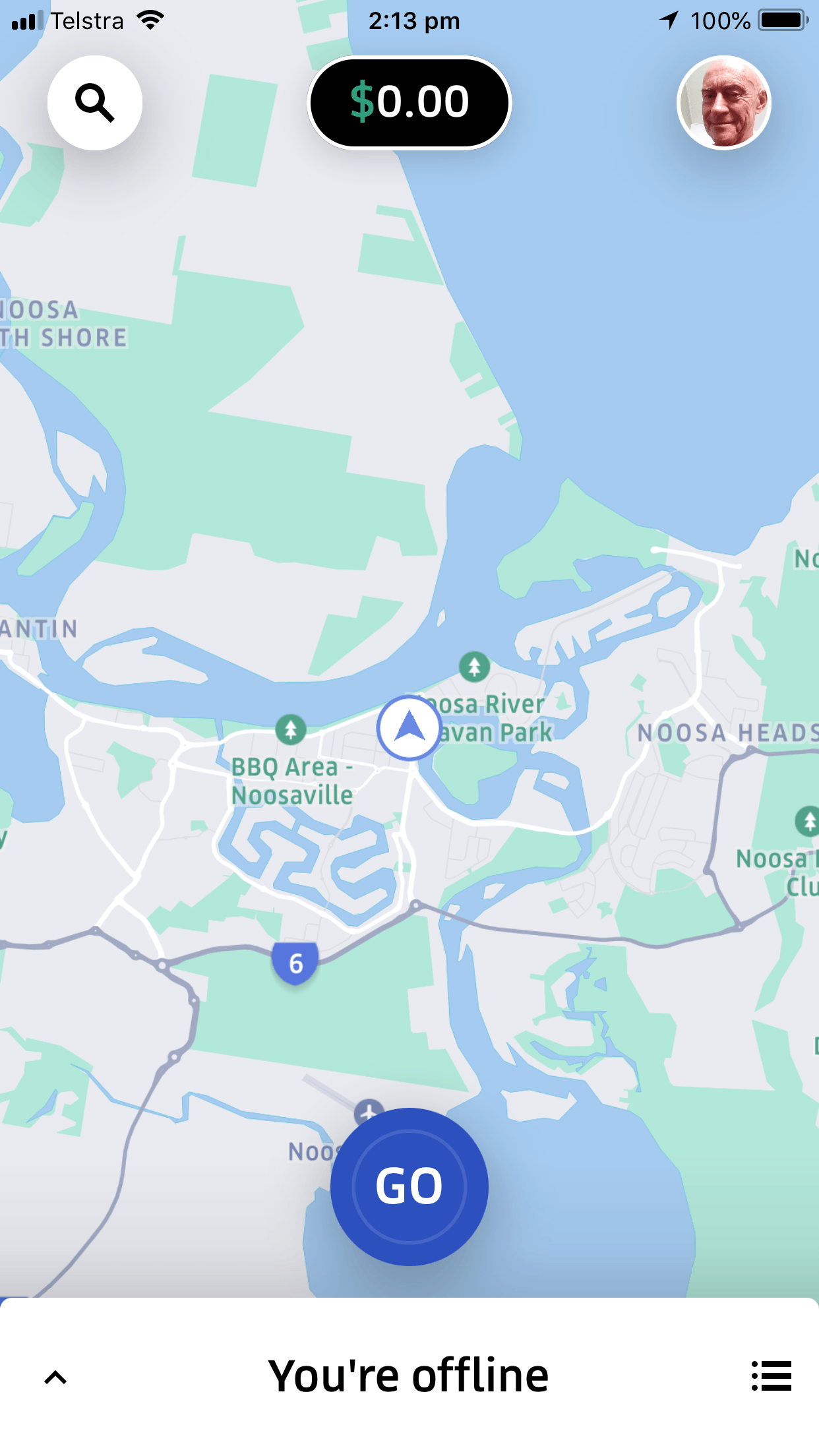 When you select the Driver App, you see a nice clean interface, with a GO button that you tap to go online.

An improvement on the previous slider. 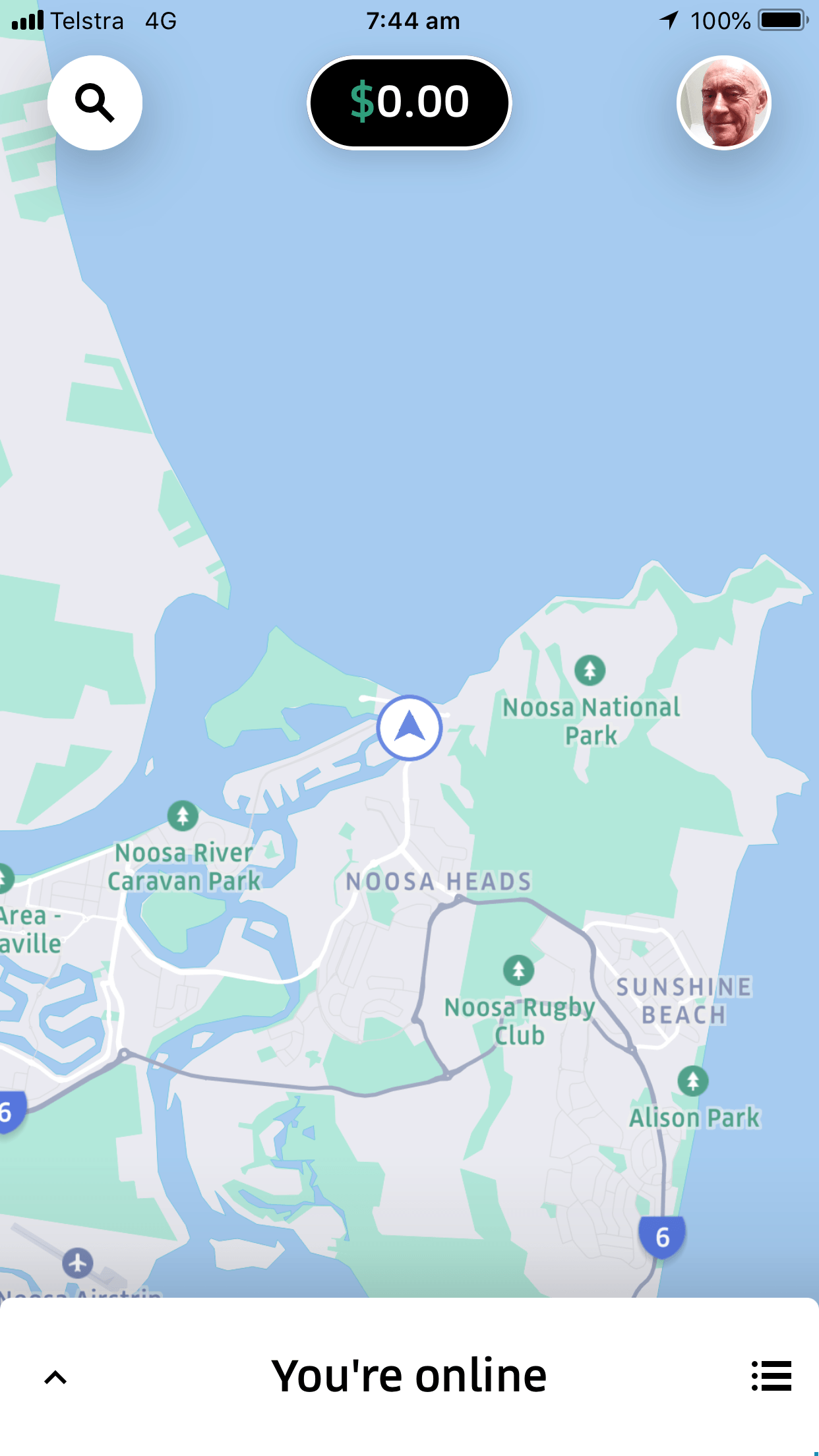 Tap the GO button and you're online.

The message at the bottom of the screen alternates between telling you that you are online and... 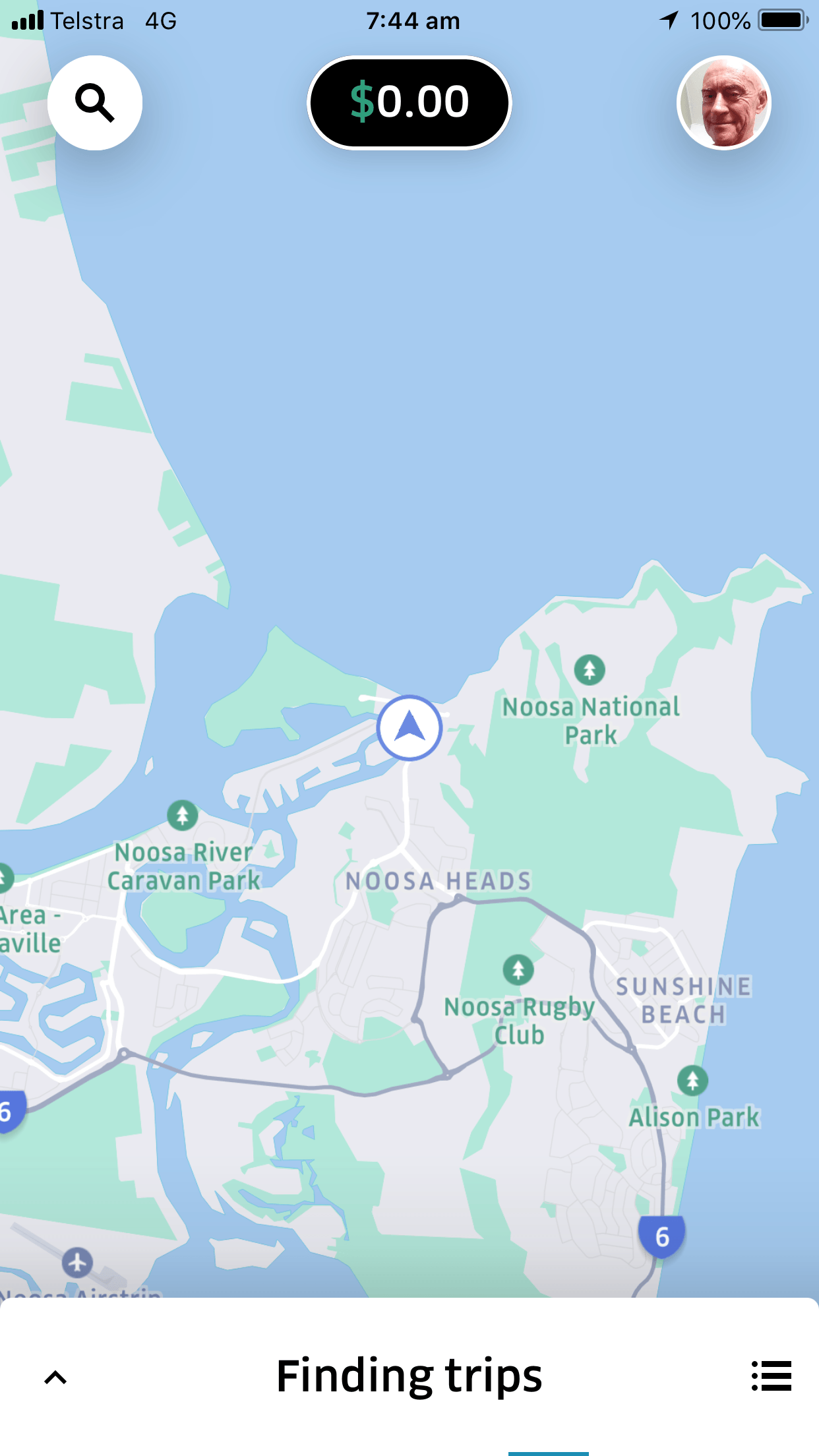 ... reassuring you that it's Finding trips. 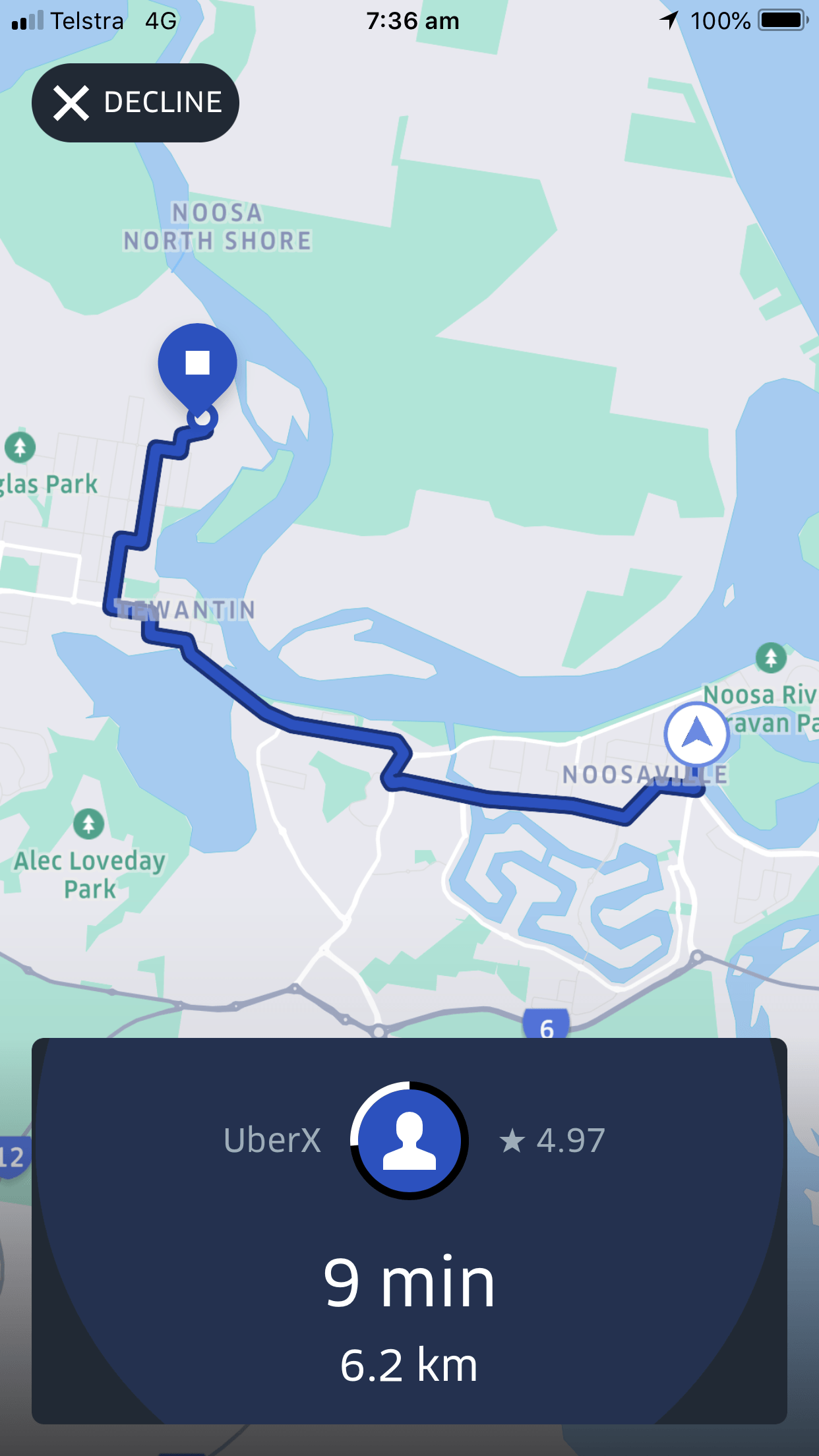 When it finds a trip, it shows you the time and distance to get  there, the type of trip such as UberX and the passenger's rating.

The sound accompanying the ping has been changed.

The passenger's name is no longer shown at this stage.

As before, you can choose to accept or decline.

In this case, I declined. 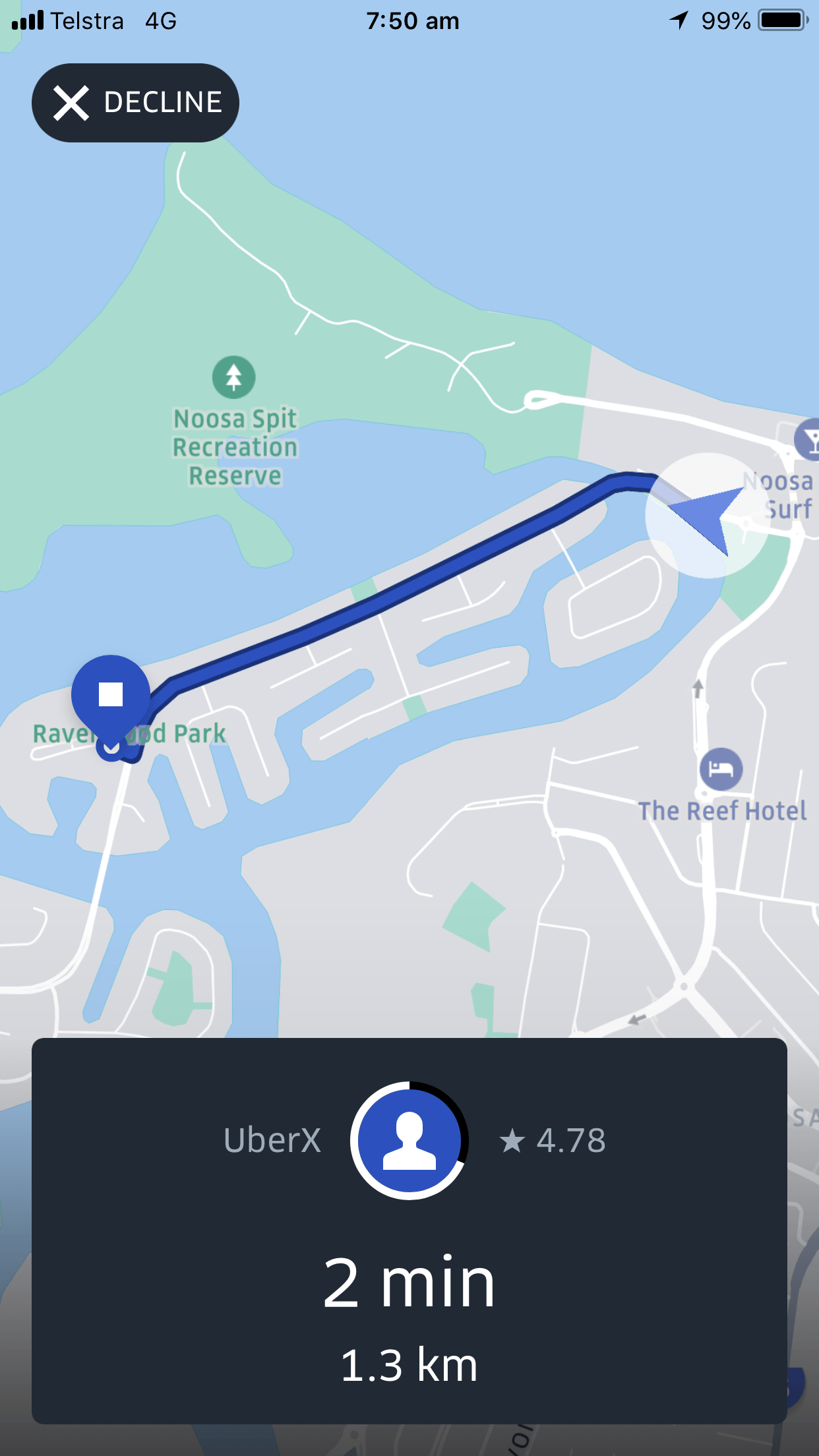 I got another, closer request next, which I accepted. 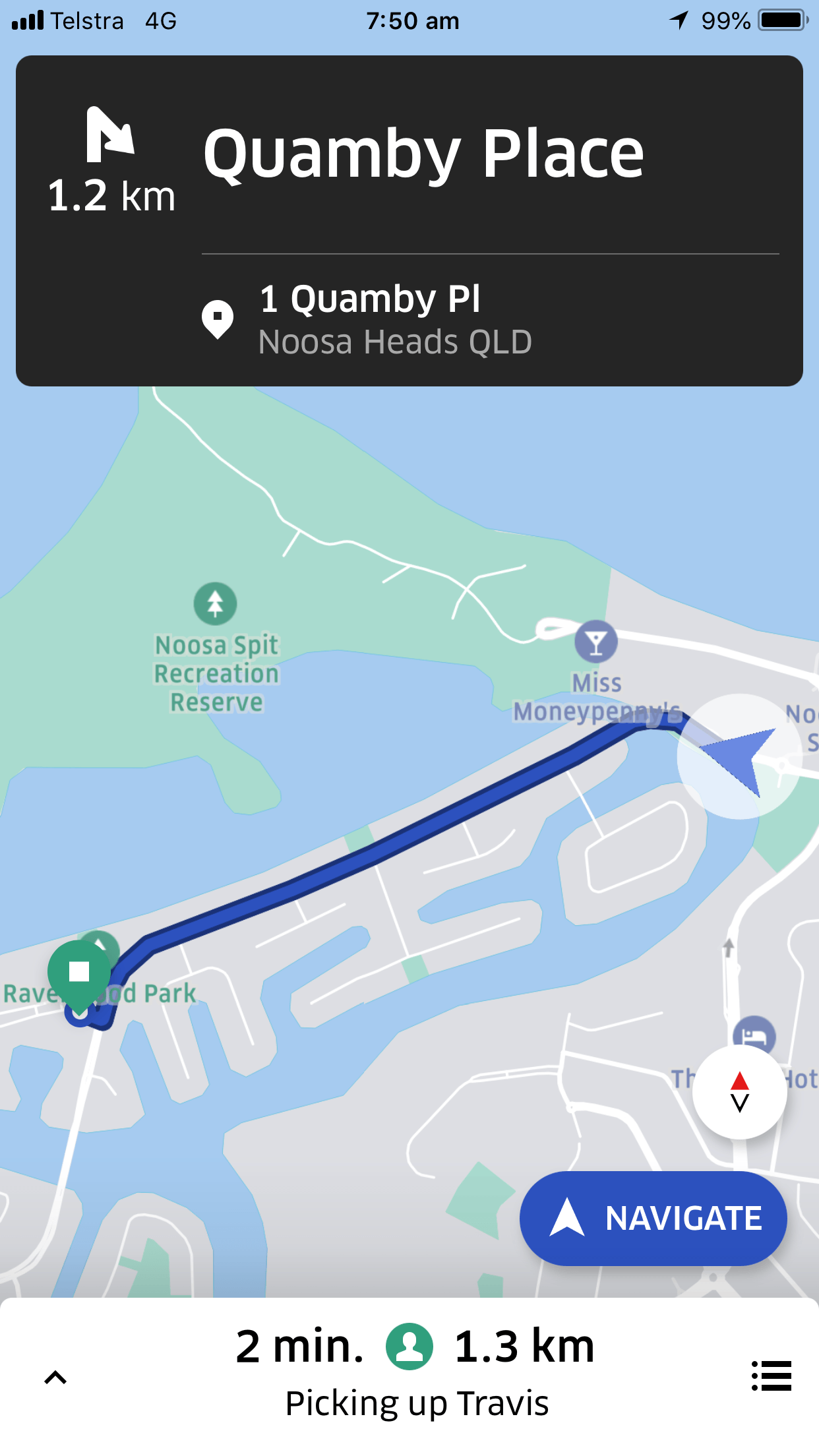 After accepting the ride, the screen displays the address, the distance, the time and the name of the person being picked up.

A route map is also shown.

I haven't explored the Navigate button. In the previous version, it enlarged the map but removed the destination name, which I found to be a nuisance.

I'll check if it's still doing that another time. 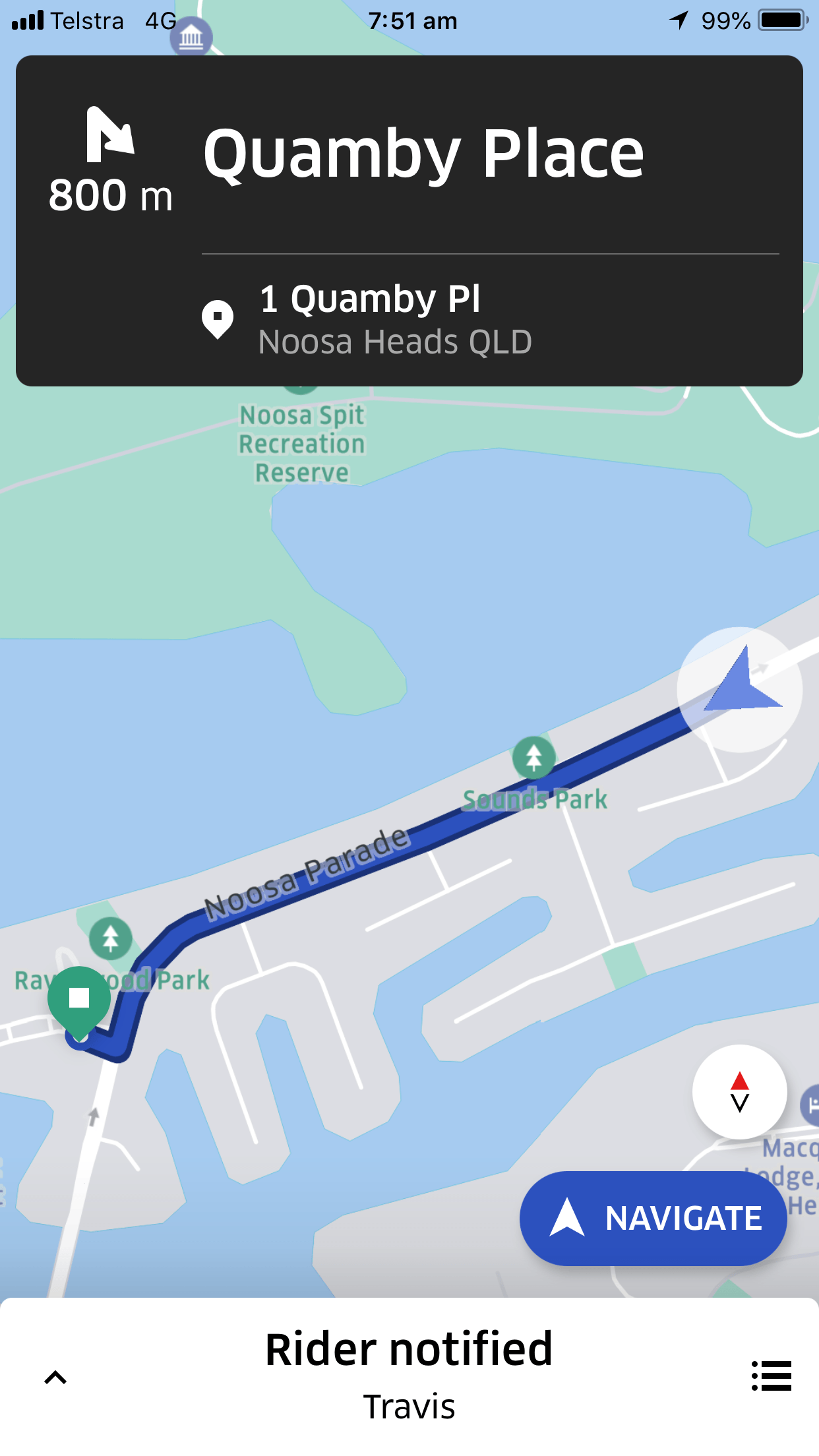 When I was still a kilometre away from the pickup point, the rider was notified.

This is earlier than in the previous version, and is a useful improvement to reduce waiting time. 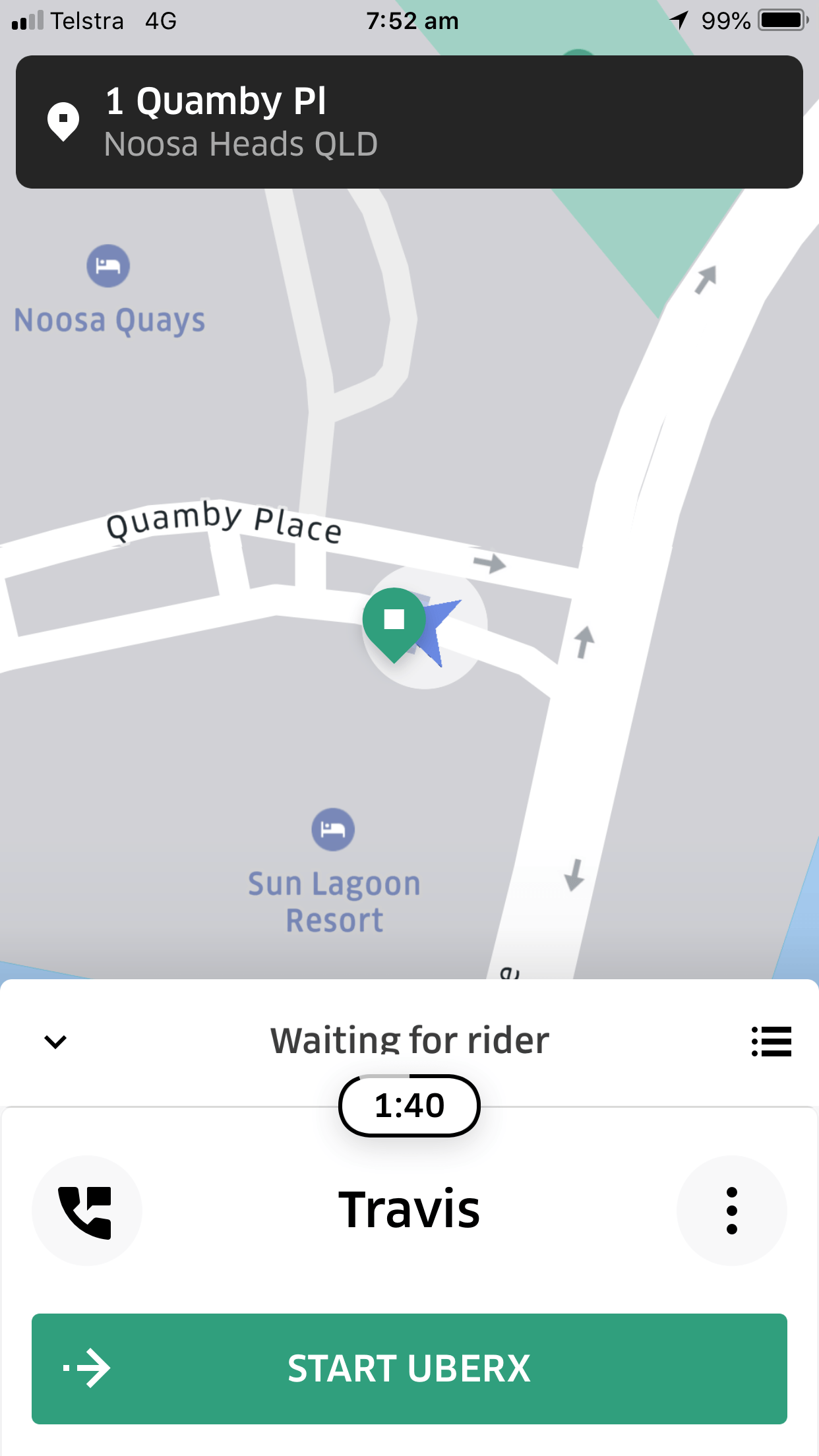 Though I still had to wait for a couple of minutes! 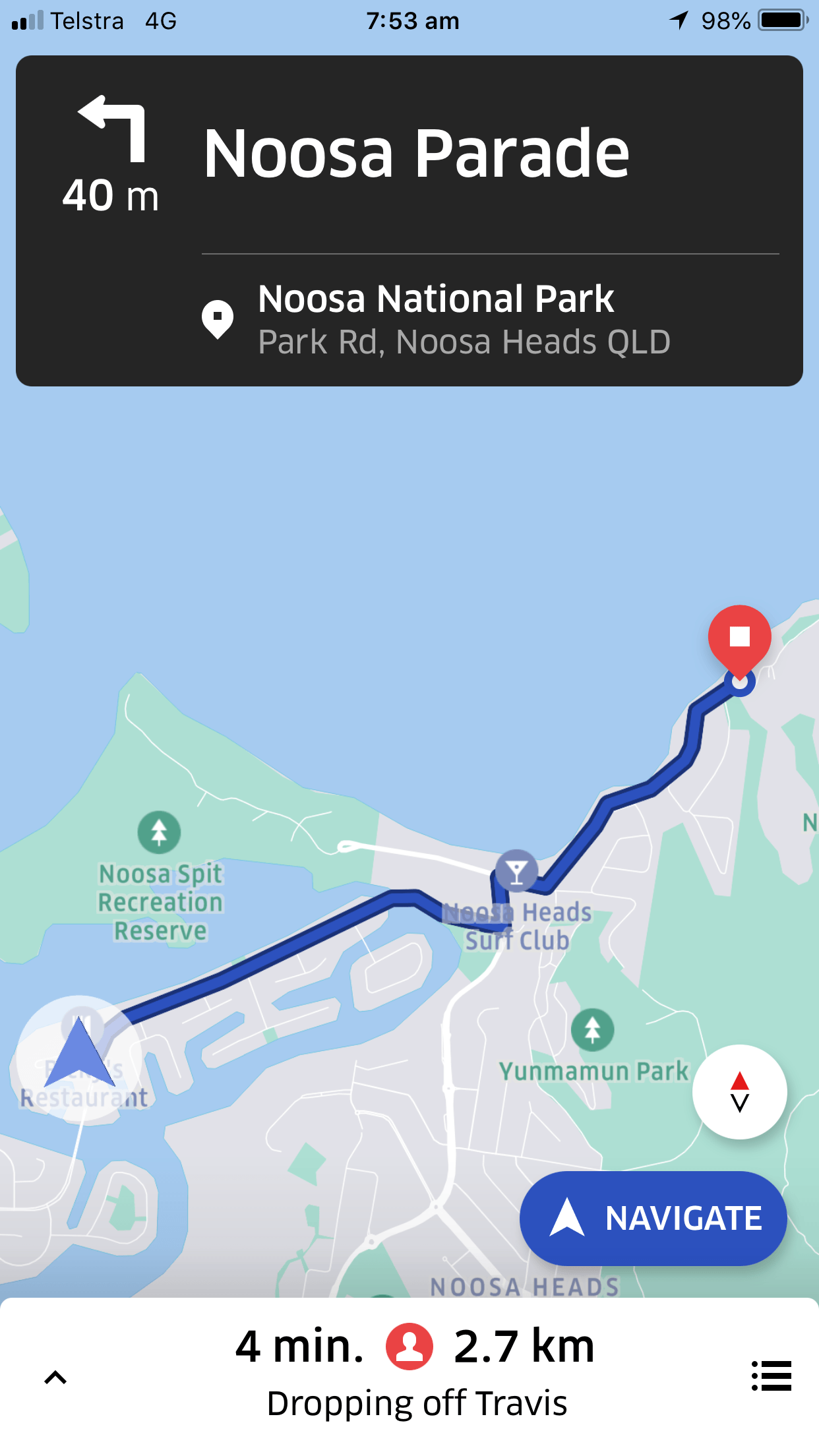 After swiping the Start UberX button, the display showed the destination, time, distance and route map. 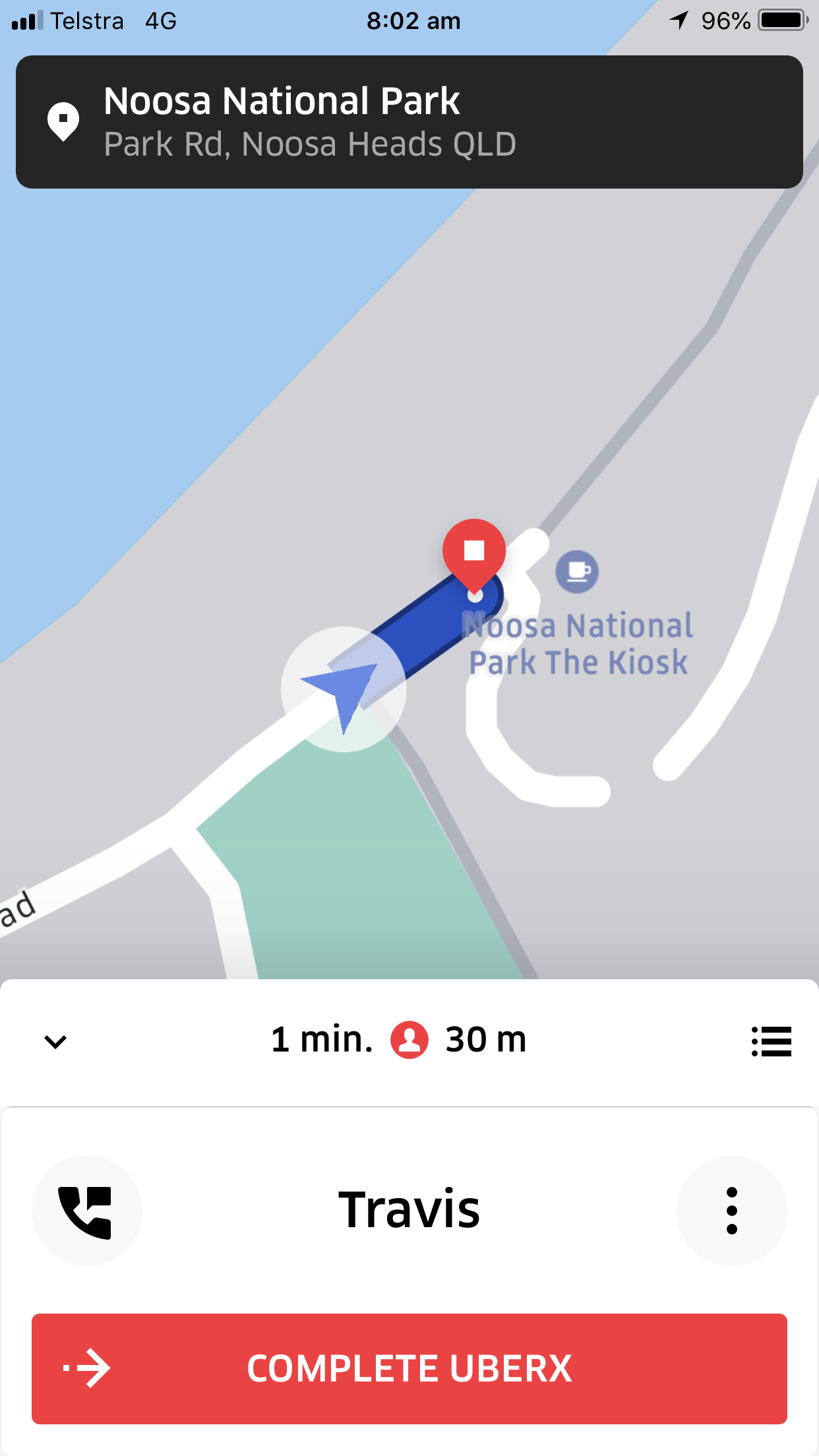 On reaching the destination, there was a swipe button to complete the UberX trip. 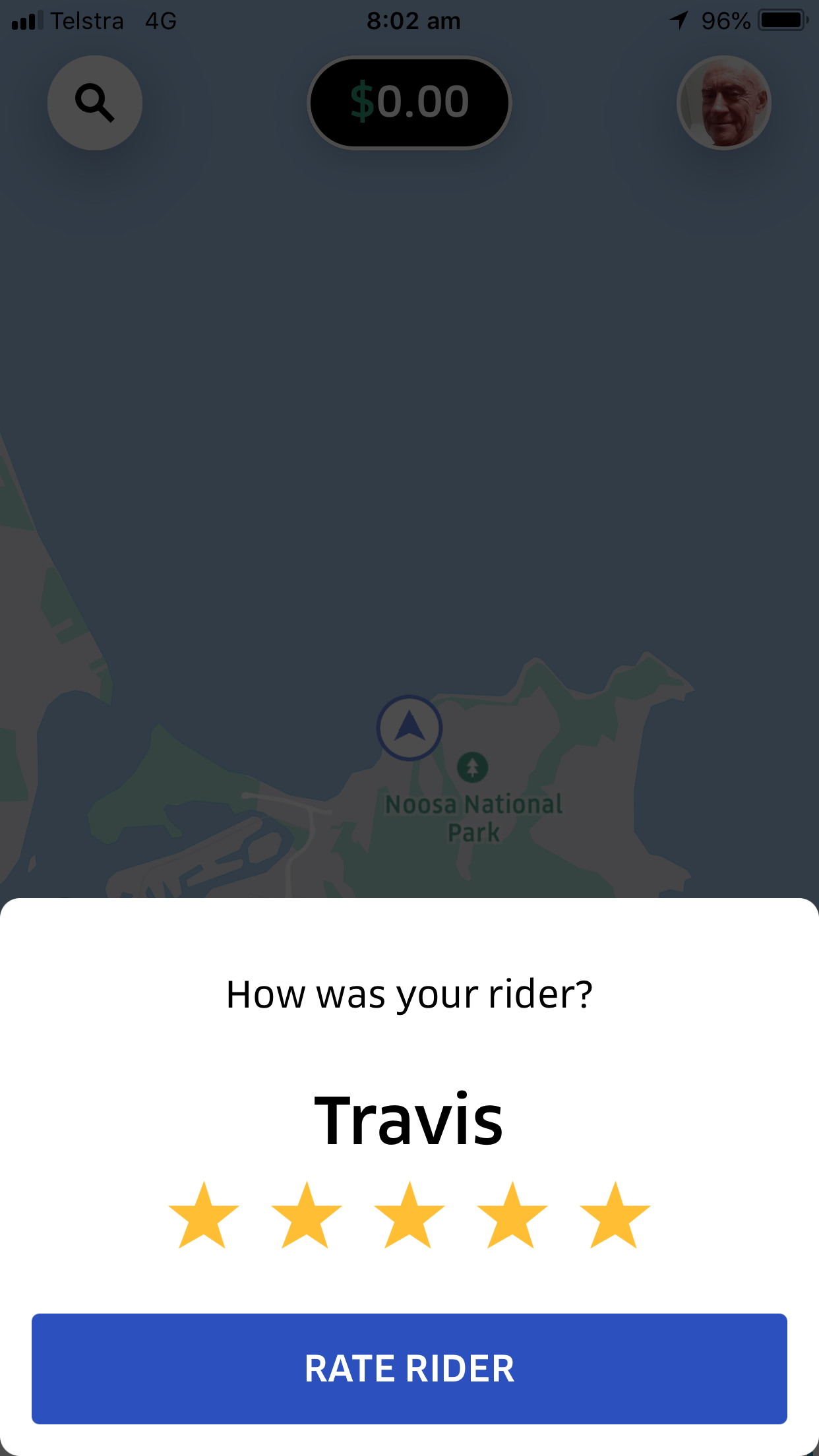 Everything is dulled out until you rate your rider.

A big difference here is that 5 stars are selected by default.

So to give your rider 5 stars, all you have to do is press the RATE RIDER button.

To give fewer stars, select the number you want before tapping the button.

This change will undoubtedly result in higher rider ratings on average.

I don't know if Uber has made a similar change to the Rider App but I sure hope so. 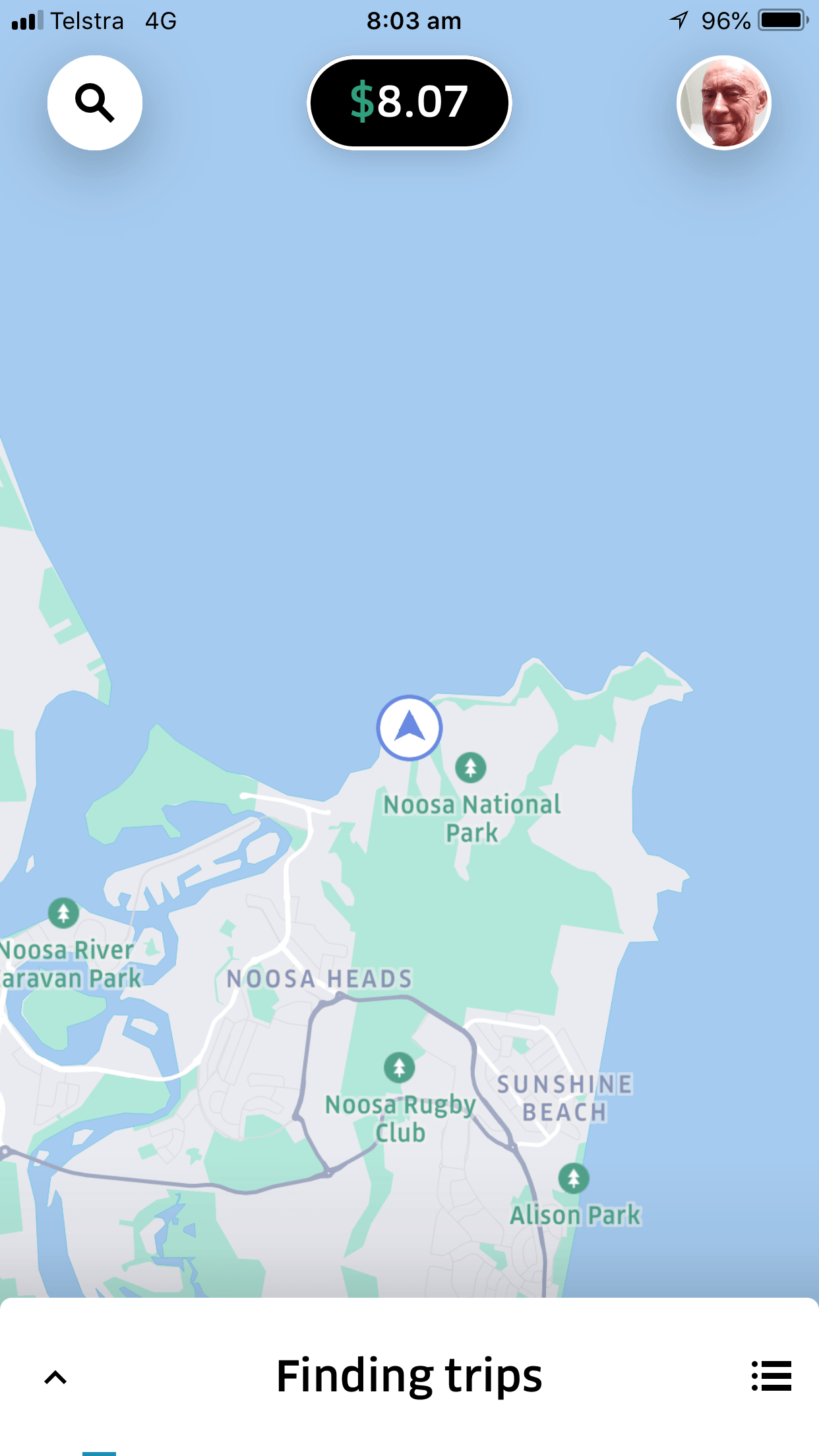 After the rider has been rated, the display goes back to Finding trips and the payment for the ride is shown at the top of the screen. 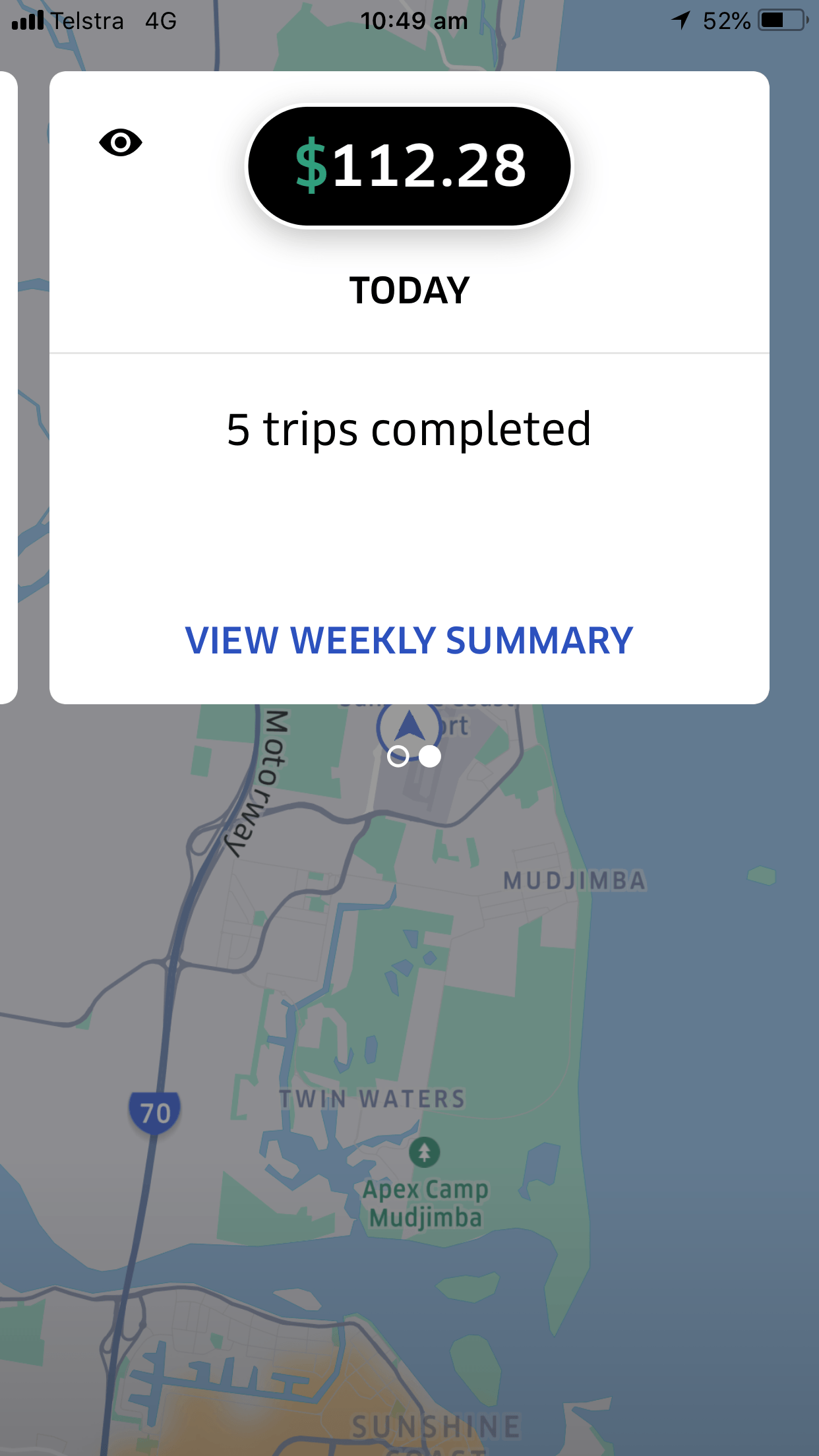 To see your summary for the day so far, tap the payment for the previous trip shown at the top of the screen.

You will then see the total earnings for the day so far and the number of completed trips.

You can also tap to see the summary for the week to date.

The weekly summary also shows the day by day bar graph and the time spent online.

Tap anywhere on the dulled out map to return to the main screen. 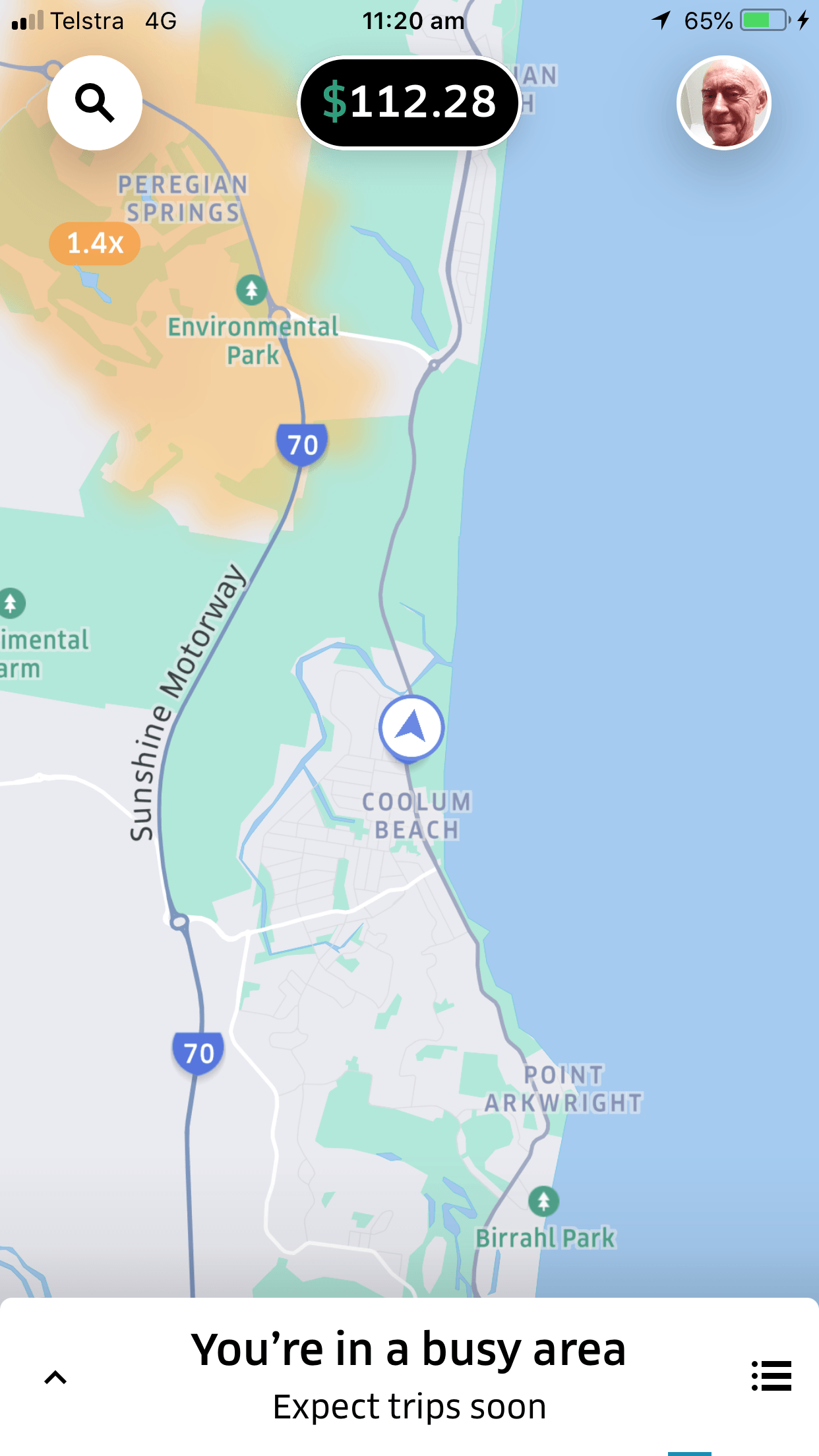 If you're in a busy area, you will get a message like the one shown.

Note the coloured area near my position showing a 1.4 surge.

As I was returning home from the Sunshine Coast airport after a drop-off and didn't really want a request in Peregian Springs, I kept driving.

No requests came in, so I haven't really had a chance to evaluate this feature.

However, I have heard from one other driver who said that he was in an area with this message for some time and received no requests. 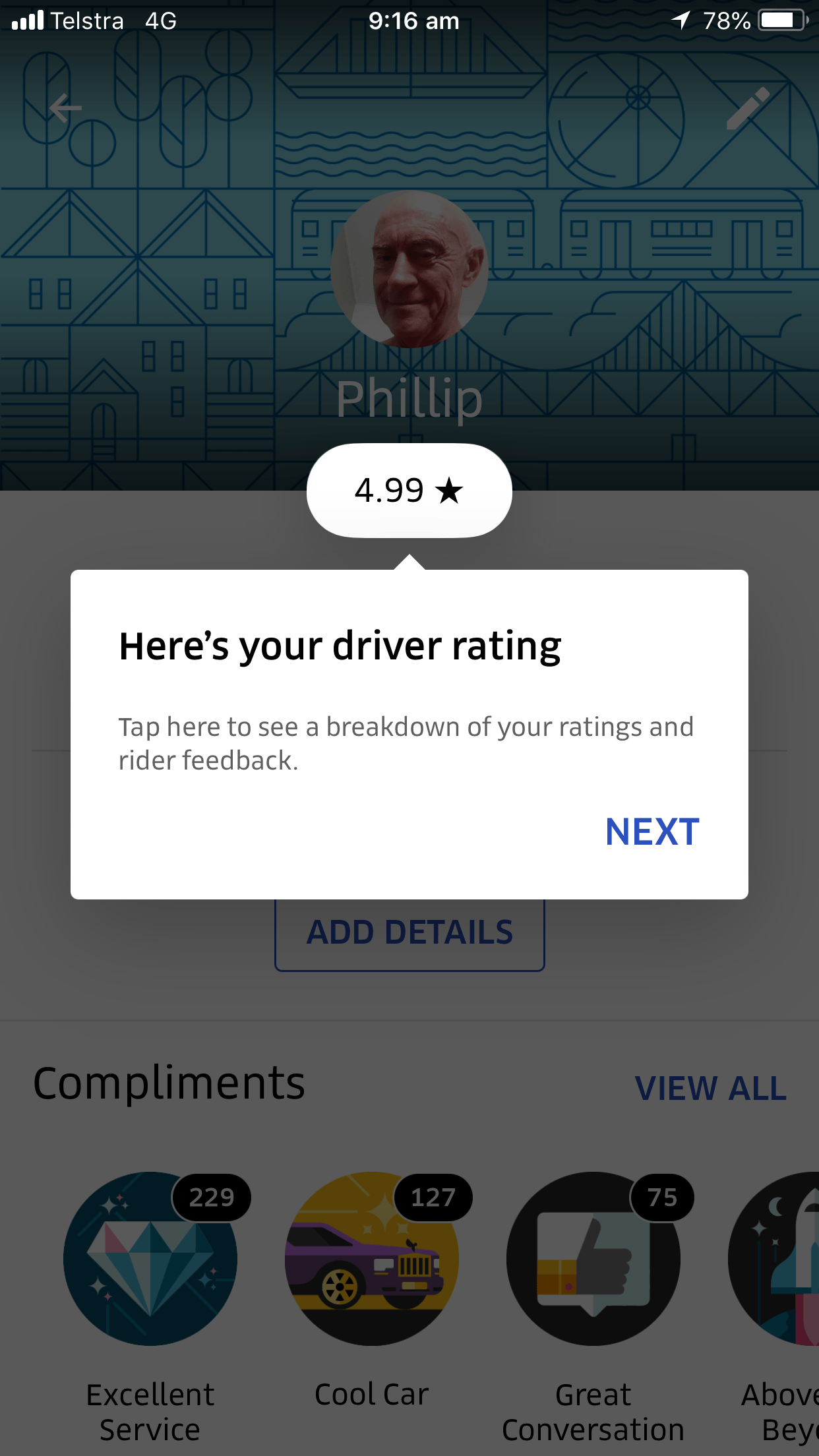 This will bring up a Notifications screen where you can checkout various items of information.

On this screen, your rating will be shown against your profile image.

Tap it to see the screen shown to the left.

Tap the NEXT panel for more information. 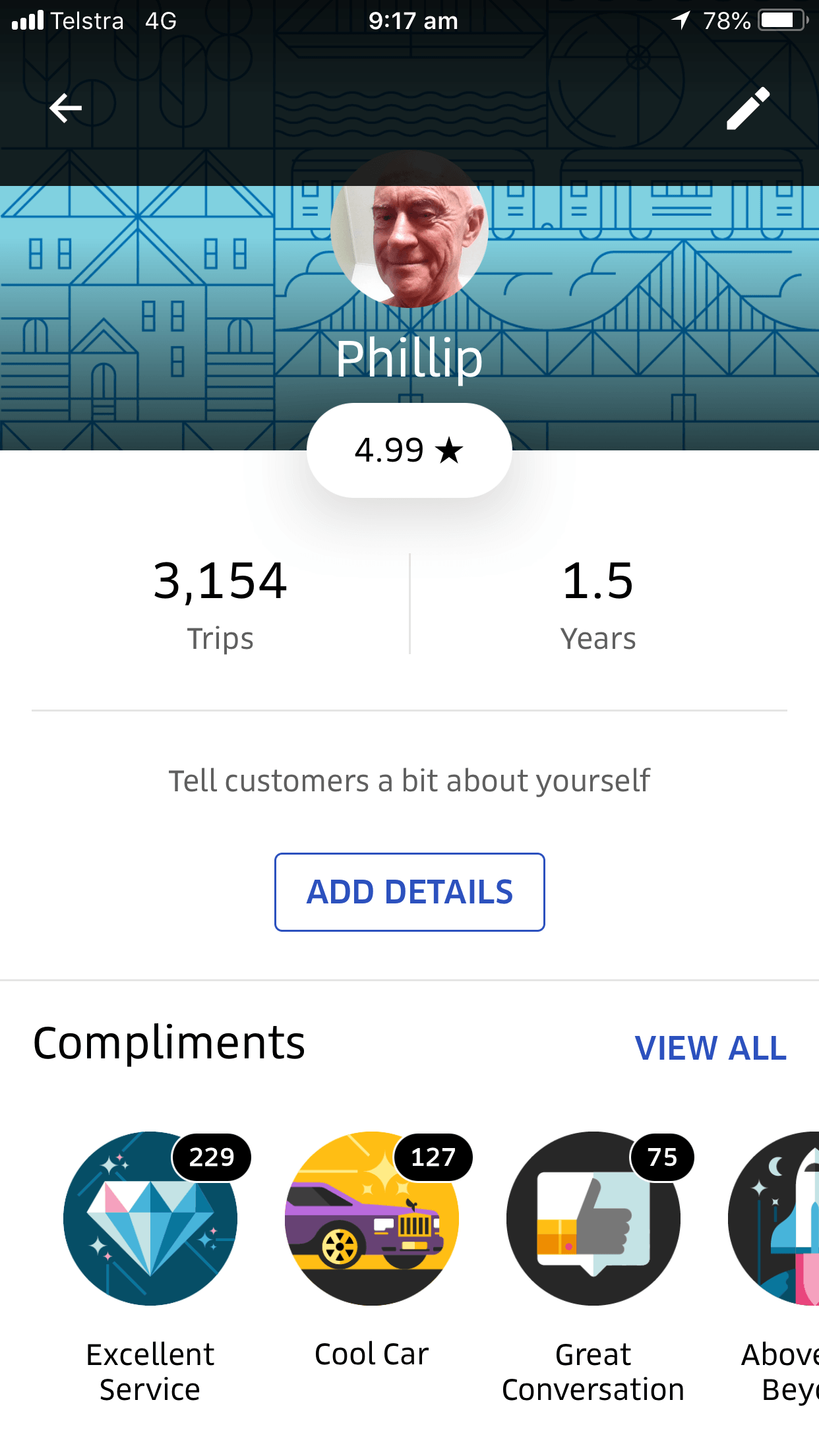 This screen shows your rating, the number of trips completed, how long you've been an Uber driver and the start of your rider compliments screen.

Tap VIEW ALL to see all rider compliments.

You can also add details to your profile that can be seen by riders when you accept their requests.

Tap the ratings number directly underneath your profile image to see how it's made up from your last 500 rides. 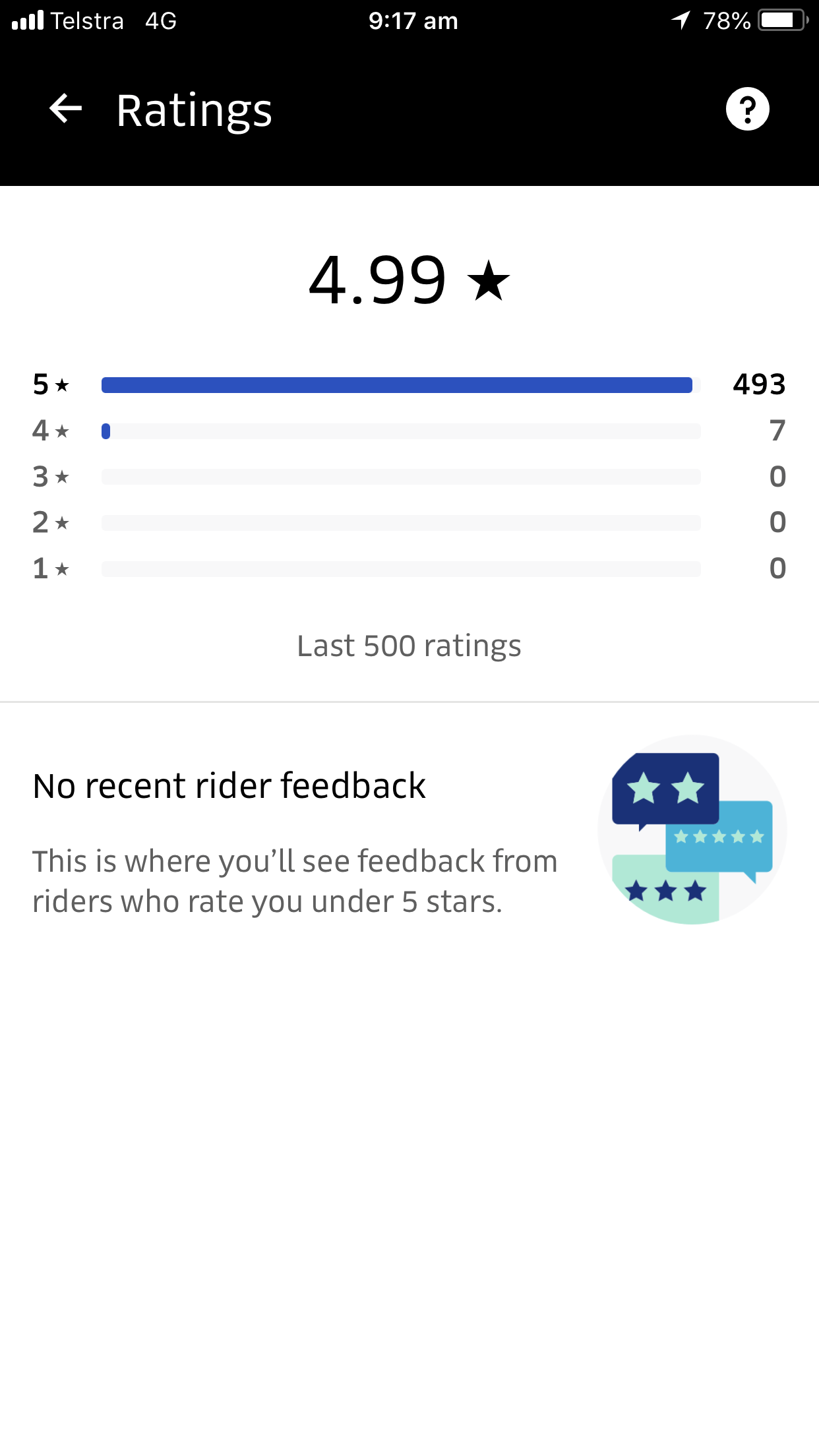 This information wasn't available in the previous version of the Uber Driver app.

This is great feedback.

Taking mine as an example, if a rider gives me a 1, 2, 3 or 4 star rating, I'll know about it immediately and hopefully learn from it.

Note that if a rider gives me 5 stars, it will only have an impact if the first of the 500 trips isn't a 5 star. 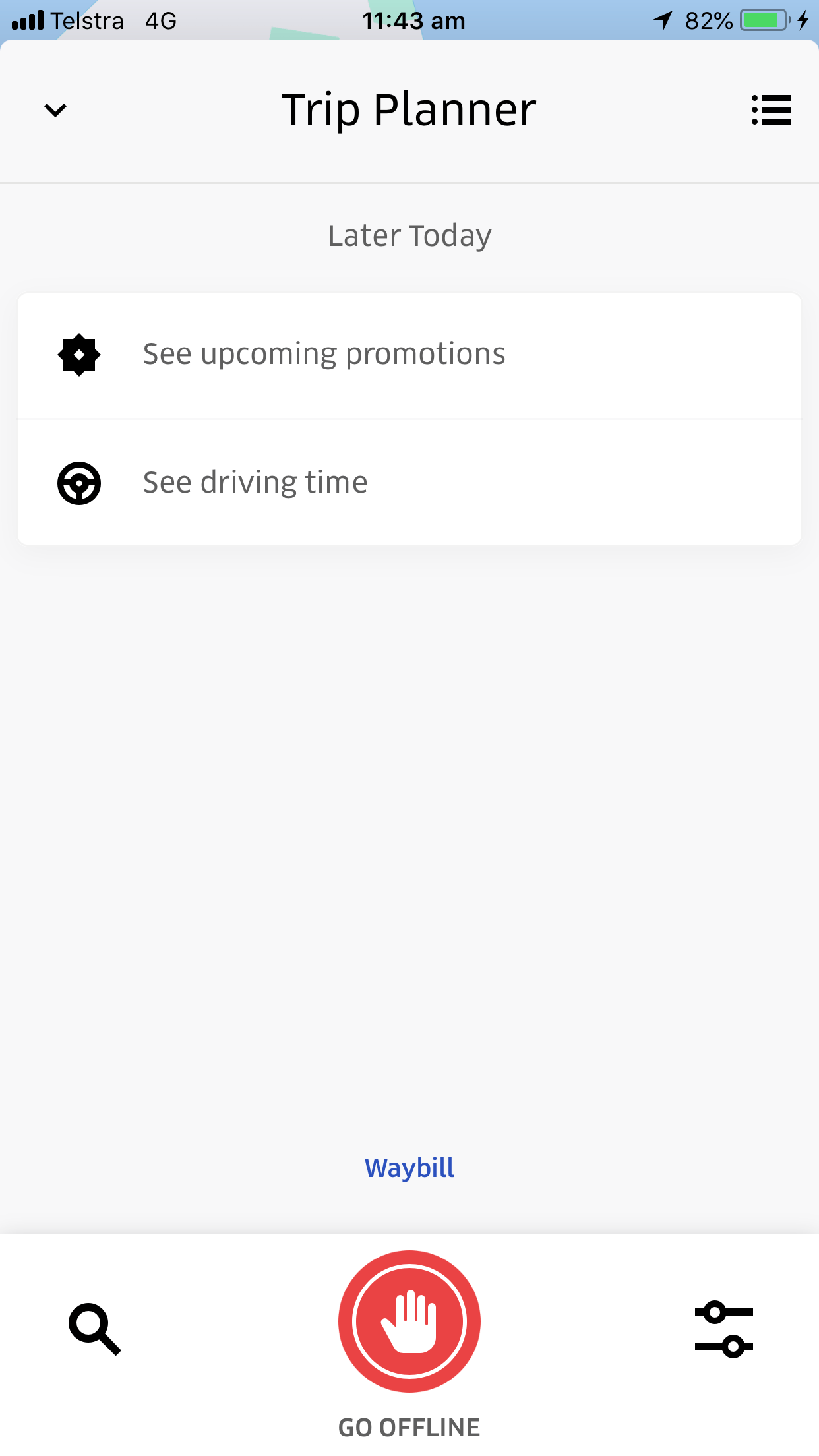 To go offline when you've finished Uber driving, tap the menu icon at the bottom right of the main screen.

This brings up the Trip Planner screen, which has a big red and white Hand button labelled GO OFFLINE.

Tap it and you're done.

This post has covered the basics of using the new Driver app.

There are many other features and they will be detailed in Part 2.

We’re In It Together: Providing An Excellent Driving Experience